We had an interesting experience tonight after a quiet day at sea. The Crown Princess Chef’s table is a dinner for twelve offered three times during the cruise. It begins with a tour of the kitchen conducted by the ship’s food and beverage director and the head chef.

There are eleven kitchens on The Crown Princess, including five massive ones. We suited up in white smocks and washed our hands, then toured the various prep stations. Considering the over 500 employees involved in food and beverage service, the environment was surprisingly calm, even though it was dinner time. In an out of the way corner of the kitchen we had Heidseck Champagne and several appetizer courses (lobster cocktail, quiche, foie gras, caviar), then adjourned to a table in the dinning room for carpaccio, lobster risotto, a main course of veal shank, beef and lobster tails, cheese, panecotta and cookies. Yes, there was a lot of food! Also Ferrari Carano Chardonnay, Louis Latour Pouilly Fuisse, and a homemade Limoncello.

The event illustrated what Princess does well and does poorly. Admittedly we are spoiled, having done chef’s tables around the world, and admittedly our companions were very impressed with the food, one couple declaring it was better than they’d had at high end restaurants in Paris. But let’s face it, it was, in Dani’s words, “Outback tries to do a chef’s table.” The ingredients are good, aside from the fact that they all have to have been frozen, but  flavors never come together to create anything more than the sum of the individual components. Yet the service was gracious, almost to the point of being ingratiating, and they gave the ladies roses, very expensive cookbooks, and even took couple and group portraits which they printed and distributed at the end of the meal. On the whole a very interesting, if not culinary, experience. 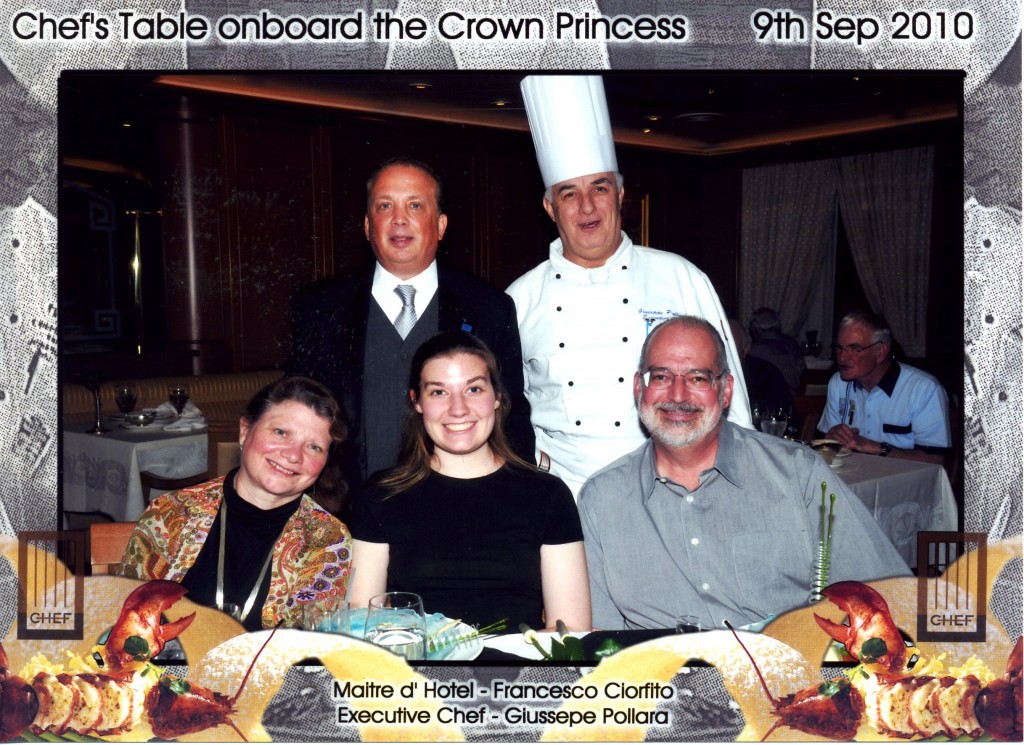