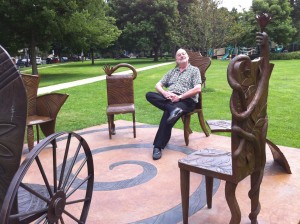 I made orange rolls for breakfast, in my ongoing effort to clear out the fridge for vacation. Then for lunch we walked down to Addis Abeba and had a platter of mostly vegetarian offerings — very tasty. On the way back we passed the interesting chair sculptures in Raymond Park and stopped at Vinic to buy some chardonnay.

Tonight was the final program in the summer season at the Northwestern Interpretive Center, An Evening With Stephen Schwartz. It was definitely the highlight of the series. In a half hour interview before the show, Mr. Schwartz played and sang two of his songs, and discussed the development process. Then there was a two hour review put on by the NU orchestra and six musical theatre majors. It featured songs from all of Mr. Schwartz’s shows.

A highlight was a segment where Mr. Schwartz discussed the development of the song The Wizard and I from Wicked, and played and sang the two versions of Making Good that preceded it in the development process. Shoshana Bean, the second Broadway Elphaba, was a special guest, and performed a half dozen numbers, ending with Defying Gravity.

We were also delighted that the fifteen songwriters we saw last night had an opportunity to perform four of the songs we enjoyed most, and this time I got them on video.

One lasting impression was that each of the fifteen student songwriters, their three mentors and Mr. Schartz are all talented musicians and singers in their own right, which is contrary to my previous concept of musical songwriters.

It’s been interesting that the only two programs we would have skipped during this summer theatre series were the two that were theatre! All three concerts have been terrific.

We had a late night pizza at Lou Malnati’s, closing the place up at 11pm.