There’s something truly fascinating about the indescribable awfulness of airline food, especially the food on American-based airlines when they try to compete internationally. It begins right in the international departure lounge, where the cheese tray offers: 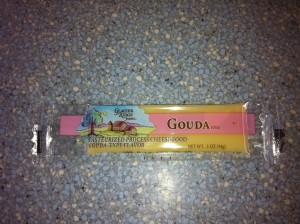 Then it’s on to the flight, where dinner is a fascinating game of trying to guess the relationship between what is served and the delicious descriptions featured on the menu. But breakfast is the real show stopper: 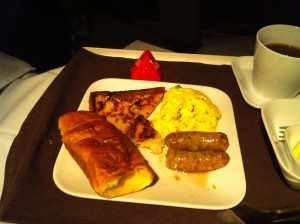 The object in the foreground is a “croissant,” but it was nowhere near as wondrous as the texture of the eggs, which mimicked fresh Spackle with chunks of embedded foam rubber. I do give points to the salt and pepper shaker designer, though, who came up with this clever stacking Delta logo. It couldn’t hold a candle to the previous night’s, though, which somehow brought Madonna to mind: 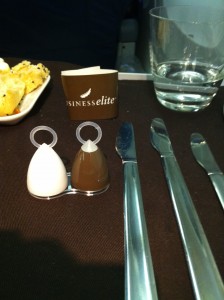