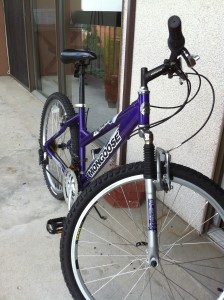 This morning while Dani was taking her midterm I unlocked Jackie’s bike from its parking meter and examined what was keeping the front wheel from turning. Not only was the hand brake pressed against it, but the wheel was bent.

It was almost impossible to push it (although I later learned how to easily disengage the front brake) and it was too heavy to carry with the front tire off the ground, so I rode it down to Turin Bicycle. It was like riding an exercycle all the way, because as soon as I stopped pedaling the bike came to an abrupt halt! Obviously a new wheel was needed, along with other adjustments. The repairs came to $9 less than the original cost of the bike, but what the heck, at least it’s fixed. We picked it up after lunch at Lulu’s.

A couple of nights ago Dani couldn’t get to sleep so she sat up making notes about new ideas for her completed novel The Last Telepath. Now that she has a weekend break, she’s been writing a new first fifty pages like a maniac. Since she was only thirteen when she started the original manuscript, I’m sure this first fifty pages will bring a new level of depth to the story.

Tonight was our next to last fine dining blowout this summer. We went to Graham Elliot, which Ron’s friend Bruce reported as his favorite from a recent trip to Chicago. Mistake! You do NOT want to go here. It is a little slice of hell. The food is okay, but the ambiance is non existent. The place is deafening, with non-stop techno/grunge/rock/rap/pop soundtrack so you can’t even hear the descriptions of what is in each dish. We had 21 courses and 18 matching beverages. 50% of the courses were completely forgettable, the others were good, but not one was as good as a typical course at V&A or Moto. Here’s an example of one course, a deconstructed tomato mozzarella and balsamic foam. If this looks about one inch wide that’s because it is: 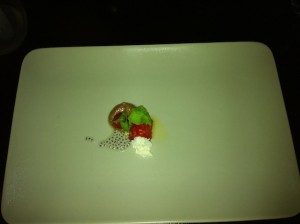 Or how about these TWO courses, carpaccio and a “Caesar salad” (I already ate half the salad in my first bite): 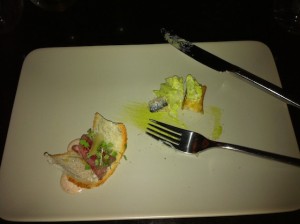 The wine list is a bunch of silly young whites. The wine carafes are 2 liter chemistry flasks. The  waiters wear jeans and t-shirts. The tasting courses are microscopic. Most dishes have many, many ingredients (couldn’t hear what) but don’t seem to combine to create a whole greater than the parts. On the plus side, price is reasonable, and it was neat to have a different beverage to match nearly every course, but 80% were mixed drinks, not wine.

At the end of the evening, too late to do us any good, we received a printed menu of everything we had. Across the top it read “the alcorn party is awesome.”

graham elliot is not awesome.