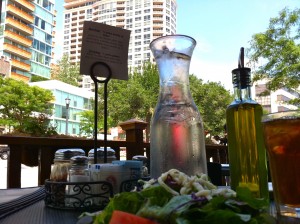 The forecast was for scattered thunderstorms and it was gloomy when I awoke, so despite the persistent head / sinus / jaw ache I went the Whole Foods early to restock the kitchen. 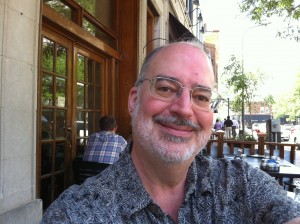 But by lunch it had cleared off and turned into a beautiful day, so I went to Trattoria Demi, a short walk down Orrington. The Fettuccine Cacciatore lunch special was tasty, and the espresso was excellent.

By this afternoon my headache was finally starting to abate. Dani got home pretty late — almost 6pm — because she was working on her lab data. Her raw score on the midterm was pretty low but apparently on the curve it was quite high. It must have been a very hard test, compounded by the rushed delivery of lessons last week. So far she has an A- the first “quarter” and an A the second, with seven days of lessons and two tests to go.

I grilled a strip steak for Dani and some Tuna for me, on what will probably be the BBQ’s final outing for the year, although I have one load of charcoal left.