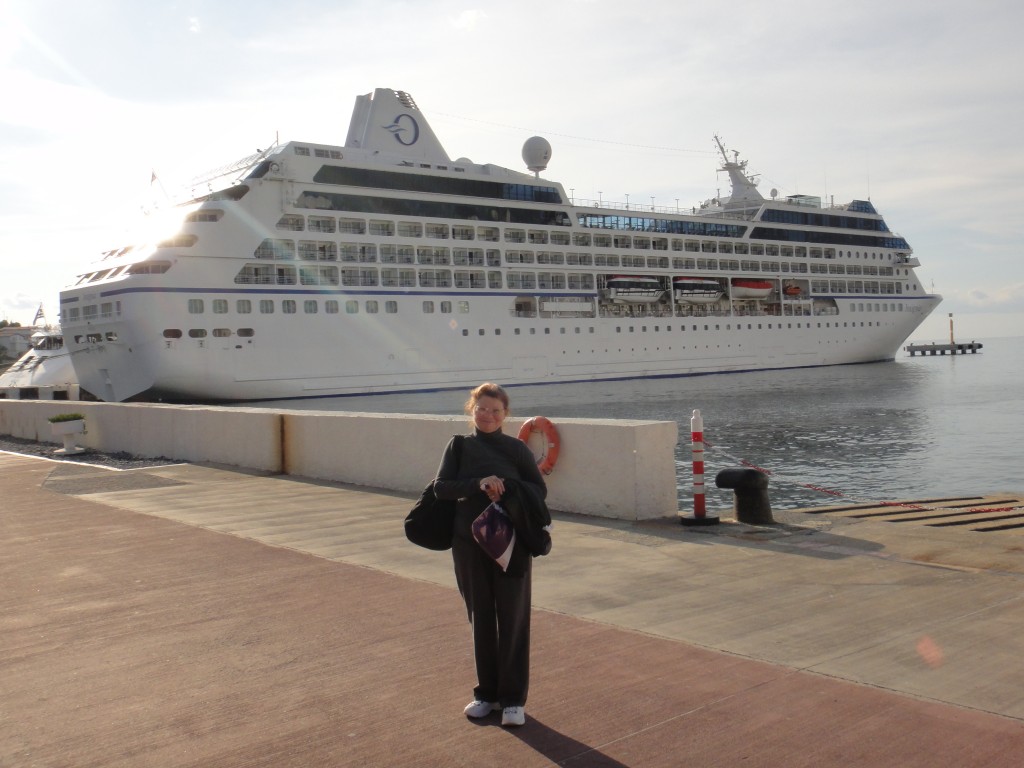 The port in Kusadasi was certainly busier than the last time we were here, when we were the only ship. Either things are quieter in the Middle East or people have just gotten used to it. No circling gunboats this time, and a relaxed atmosphere throughout the busy town.

In any event, the contrast between Greece and Turkey is striking. Where Greece seemed completely shut down, Turkey is booming. Kusadasi is vibrant, with shops, restaurants, construction and lots and lots of tourists. The Turkish people are very friendly (albeit insistent shopkeepers, which takes some getting used to), and well aware that tourism is Kusadasi’s number one industry (followed by textiles and agriculture).

The main reason is Ephesus, about a 20 minute drive from the port. 2000 years ago it was the most sophisticated city in the world, other than Rome. It’s population was a quarter of a million. Its homes featured running water, toilets, heated floors and beds, and many other innovations that wouldn’t be rediscovered for more than a millennium. 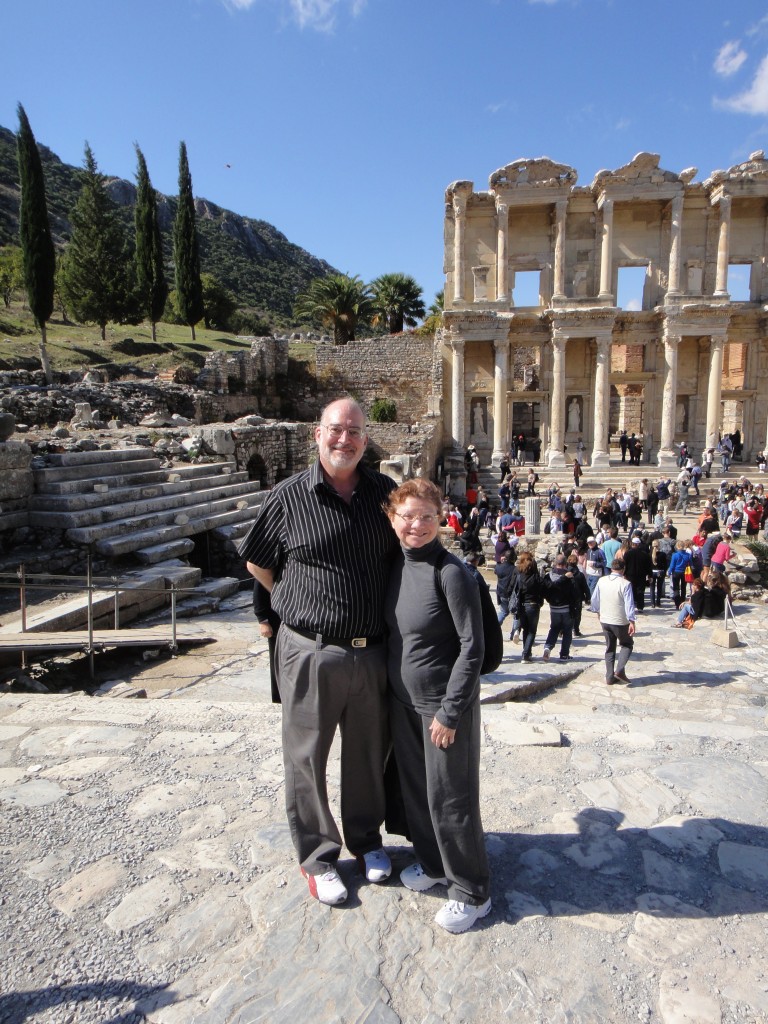 Ephesus was physically destroyed by earthquakes and a landslide, and economically destroyed when its canal to the sea disappeared. Almost completely buried, it wasn’t rediscovered until the 20th century. The site has now been 14% excavated, and attempts have been made to reconstruct some of the structures, much like a giant jigsaw puzzle.

Our day couldn’t have been more different than yesterday. Not only was the archaeology 100 times superior, the weather was, too, with clear skies and a temperature of 60.

Since we’d been to Ephesus before, we opted for a more detailed tour this time, with a working archaeologist, Erjon, as our guide. (Our tour director also was an archaeologist, although she has been directing tours for 11 years, since it pays better.)

We began by taking a coach to an off-site museum where Erjon guided us through all the best finds from Ephesus. (Some of the pieces have been copied so that a duplicate remains at the site, subject to the elements.) Then we traveled to what is essentially Ephesus’ back door, so that we could work our way down the rather steep main street.

The best part of our tour was a visit to the villas. This new excavation, beneath a protective cover, exposes seven adjoining homes, each up to 7000 square feet. The first one had an 1800 square foot dining room. The high rent district, indeed! The way they’ve done this excavation is spectacular, with glass walkways that allow visitors to walk through the entire space and see everything below them. 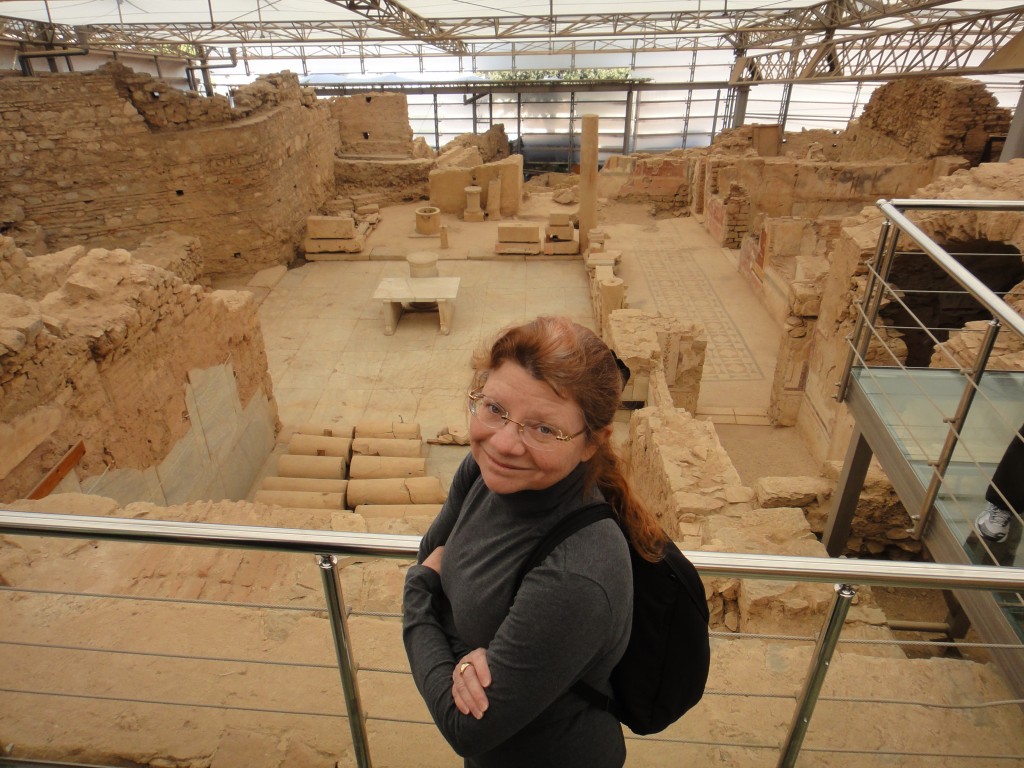 After the villas, we posed in front of the facade of the library, which looks like a two-story building, but wasn’t. One of its more interesting features was a tunnel to the bordello, making a visit to the librarian pretty exciting indeed.

In the afternoon we traveled to Restaurant Sizguzar for a delicious Turkish meal of grilled vegetables and minced lamb kebabs, then returned to the port to walk through the bazaar and tell very polite but insistent shopkeepers that we didn’t want a rug. Or a jacket. Or jewelry. Or a statue of Priapus that was six inches tall and six inches long, if you know what I mean.