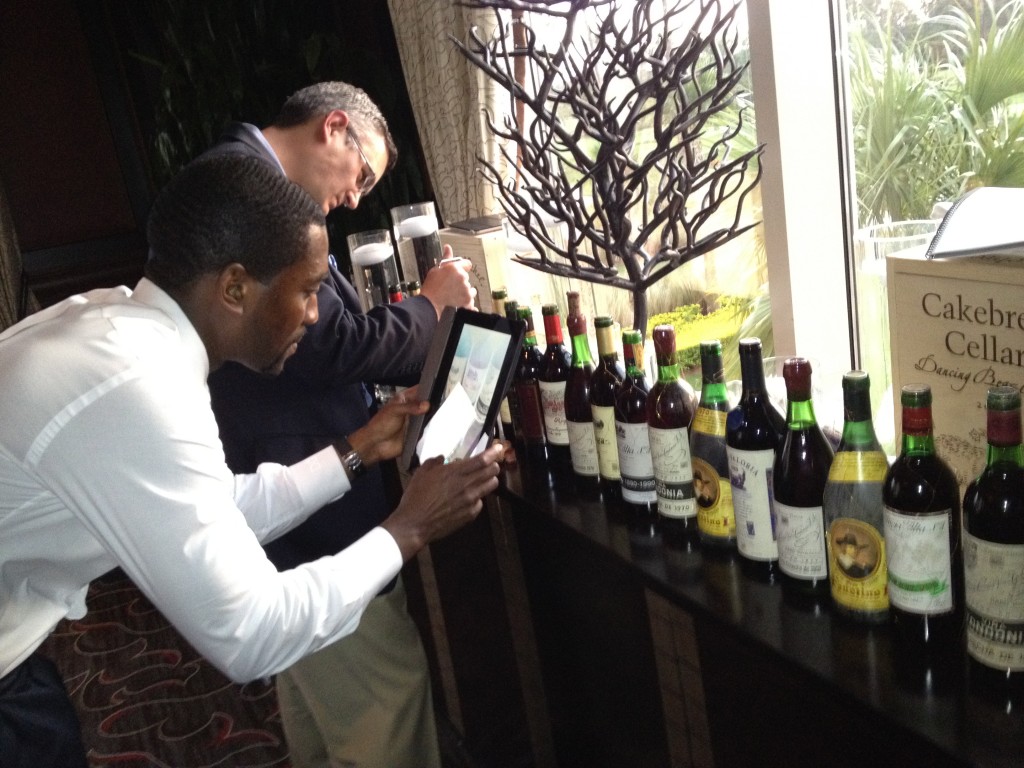 Keith Edwards organized a stellar tasting of old Spanish Riojas. The event was held at the Bull & Bear restaurant at the Waldof Astoria. Attendees included Keith and his wife Parlo, Russell Edghill, Ron and Bev Siegel, Linda and I, plus industry guests Dhane Chesson from Vibrant Rioja, and Master Sommelier Andrew MacNamara.

Keith is quite the scholar, and he prepared an amazing booklet to accompany the event, with notes on Rioja and pictures of the wine labels. The wines came from Keith, Ron’s cellar, and I contributed the oldest wine, a 1925 Marques de Riscal.

Andrew moderated his event, and poured the wines in reverse chronological order, an approach that I have also been gravitating to of late.

This was an eye-opening tasting, because Rioja wasn’t really on my radar, and I was shocked to find that after 20 years or so it has much in common with our old favorite, BV Georges de la Tour Private Reserve Cabernet Sauvignon, a wine that was only interesting prior to the 1980 vintage. This is curious, since Rioja is mostly Tempranillo, but it is probably due to the American oak barrels and a certain amount of oxidation.

What a great discovery, because it now means we have a whole new category of interesting, old, and fairly affordable wines to look for!

The Rioja was poured in three flights. Linda observed that, unlike in other areas, there seemed to be no relation between price and quality.

The first two flights were interesting, but the third flight was stellar! I believe my rankings were almost identical to Ron’s ad there was surprising consensus amongst the group.

Stewed vegetables, dill (the result of the oak), spices, 88 points

For a detailed analysis of the wines, visit Keith Edward’s blog.

Following the formal tasting, a terrific dinner was served by Arnaud, including:

Best version I’ve ever had, served with an herbal sauce, and minced perfectly, with a wonderful crunchy/salty component as well. A new invention of the restaurant, and a great dish.

With caviar and truffle. Creamy and wonderfully complex.

Served in a rich and delicious buttery flan. I don’t even like gnocchi, and this was great.

Steak and Filet of Sole

This was actually the weakest course! The steak had that gamey, stringy texture from dry aging that I don’t like, and the fish was extremely salty, probably the result of a mistake.

A nice assortment of cheesecake, creme brulee, and a couple others.

Of course 20 Riojas was just the formal tasting. Then there were the wines passed at dinner!

Served blind, and caused quite a discussion. Unidentifiable as SB, but great. 95pts

Superb Bordeaux at its peak, like driving down a dusty road in a bell pepper field, 95pts

A superb old Burgundy that I wish had been served before dinner, as it got a bit lost in the shuffle. Burnt orange rinds. 95pts

Potentially a great bottle, and the nose was good, but sadly undrinkable.

Another wine that sadly got lost in the shuffle. I wish this had been served with the meat, but it came after dinner and was immediately faced with sweet wines. Tarry, figs, tannic, drinking very young but more accessible than most young Grange, 94pts

A Sauternes-like wine from the Loire. Great botrytis and apricot nose, but off balance, 89pts

Rather simple and cloying after the 1971 PX, 89pts

A massive wine, not within 20 years of being drinkable. Inky, chewy, tar and tannins. Impossible to score at this point.

Wow, what a great evening! Thanks to Keith for setting it up, and to everyone for their thoughtful comments throughout the tasting.