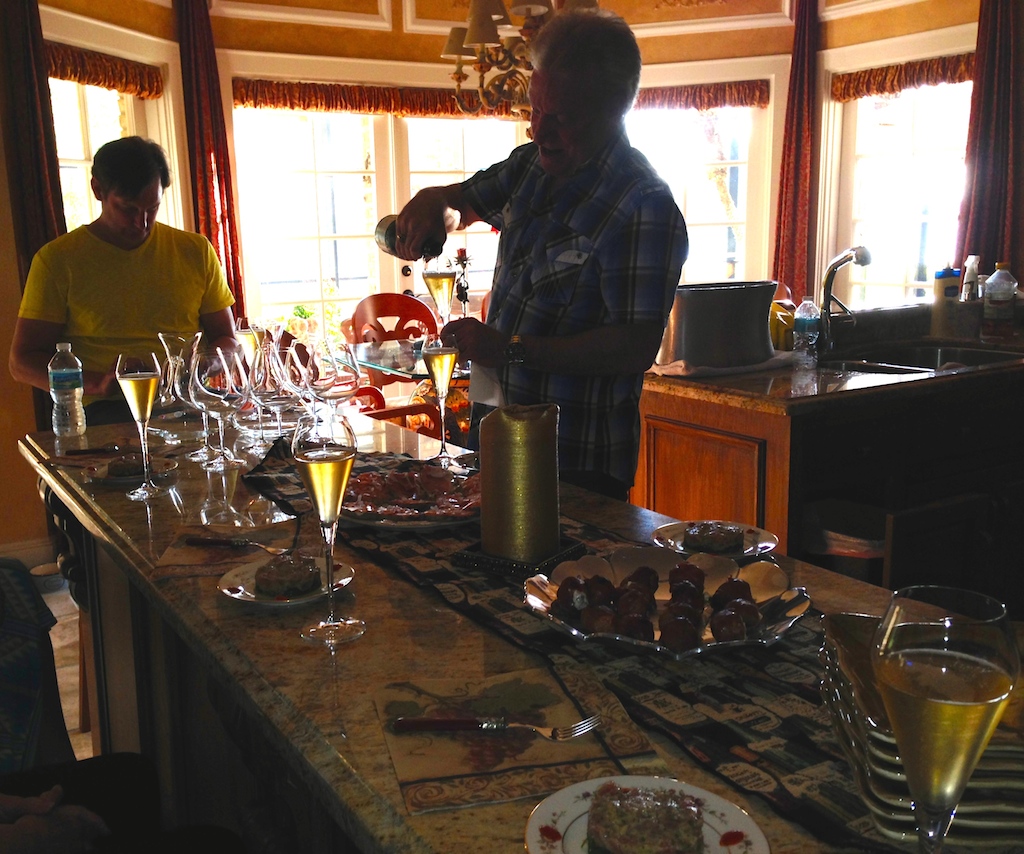 A few weeks ago we got together with Ron and Bev for dinner at The Vineyard, with the shocking result that the Bordeaux outshone the Burgundy. This almost never happens. So when Ron invited us to join Rhett from B-21 at their home for dinner, I was ready for a rematch.

Dinner, which Ron and Bev threw together on the spur of the moment, was amazing. We started with tuna tartare, smoked salmon, and Ron’s famous balls (sweet red peppers stuffed with mozzarella and wrapped in bacon). These all went really well with the Jacques Selosse.

We segued to the patio for Stone Crabs with mustard sauce. What a great match to the Aubert and what a perfect evening for stone crabs on the patio!

This is where the Burgundy kicked in, and the first two were the wines to be all night… until the end, when Ron did beat them, with another Burgundy, as you’ll see.

In the dining room we had a phenomenal baked sea bass, radicchio salad with a delicious Chardonnay vinegar, and then prime steaks from the Meat House. We finished off with Bev’s famous tira misu. (I don’t think I’ve had tira misu since the last time I had Bev’s because it’s never as good anywhere else!) The idea was to mimic a dinner at Eddie V’s, but every course surpassed it.

As for the wines… order was restored to the universe. The old Burgundies were absolutely superb, and eclipsed all of the other wines. The Bordeaux paled in comparison, although the Unico certainly was a great wine.

As dinner wound down, I didn’t think anything would top the two 1964 Leroy wines, but then Ron dared me to name something and he’d see if he had it in his cellar.

For years my go to wines at Bern’s were the now-depleted Pierre Ponnell Burgundies 50s and 60s, in particular the 1957 Morey Saint Denis Clos de la Roche. 1957 was a pretty good year in Burgundy, but I always wanted to try the 1953. Sure enough, Ron had it! Well, not only was it stellar, it was the Wine of the Night, beating the Leroys. I scored it 100 points.

And now Ron has even more bragging rights about his cellar, because where else in the state (country, world?) could someone just pull that wine from their cellar?!

We finished out by the fire pit with some Armagnac. Everything had been so wonderful even Linda was amazed to discover it was 2am!

Young, perfectly integrated, cherries, earth, balance, vanilla, wood, mint, vanilla, cocoa, spice, butterscotch, charred wood, amazing sweet fruit. I named a producer, vineyard and vintage that I wanted to taste and Ron produced exactly that wine, and it was the Wine of the Night. 100 pts

Pleasant, but lacking the depth, balance and complexity of Laberdolive Bas Armagnac. 90 pts