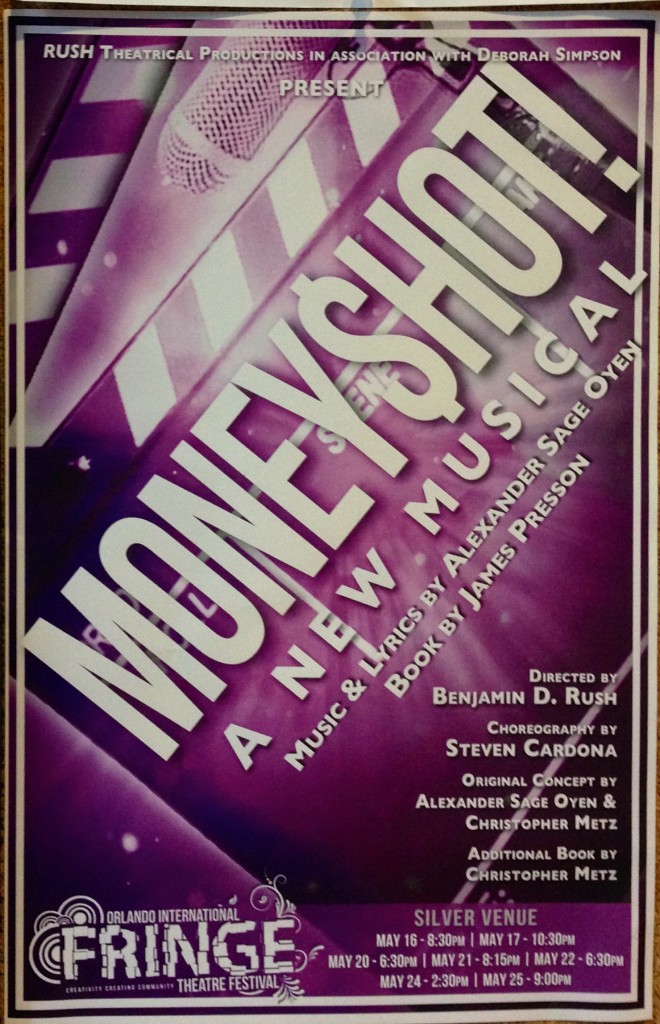 Alexander Sage Oyen is a young composer of Broadway-style music. He first came to my attention when a few of Dani’s friends sang on his debut album, released shortly after his graduation for Dr. Phillips High School. Since then I’ve purchase two more of his albums, which include many excellent numbers that could easily come from a musical in the style of Songs for a New World or The Last Five Years.

That reading of the show had a number of good songs, but the plot and pacing didn’t quite work. I sent Alex a couple of pages of notes about it, and he sent me unreleased recordings of the score. So it was with great interest that I went last night to see the opening of the show at the Orlando Fringe Festival.

The first thing I noticed on the poster was that the book had been rewritten by a different author, so I expected a different approach to the story. Indeed, that was the case. The previous slow start, prior to going to LA, was completely cut, as was a drawn out chase scene in the ending (which would never have worked onstage).

The middle part was less changed, although the plot is advanced more through songs and less through dialogue, a good move. The show still has two fundamental problems, though.

The first problem is that it revolves around a love story between the lead and a guy she meets on her first day in LA and moves in with. Their relationship is never developed, and just doesn’t ring true. In fact, since his part has been pared down and his roommate’s part bolstered, I kept expecting her to fall for the roommate instead.

The second problem is that this is a show about a girl who becomes a porn star, but to avoid any nudity (not a requirement of the Fringe, but appropriate for a show rated PG13) her entire career has been skipped. She goes for an interview, and then, except for a couple of arguments, we skip forward five years and she’s thinking of quitting. This simply doesn’t work. We don’t see why she likes the job at first, why she grows tired of it, or why it causes the arguments. And since the arguments are about a relationship that never developed, it leaves the whole thing looking for a convincing story line.

That said, Alex’s music is excellent. I noted many of the songs had changed. I wish he’d left in a couple of the catchier ones, but there were also some good new ones.

The talent was top notch. All three leads were excellent singers and actors, and the choreography and pacing were terrific. Clever use of rolling chairs, tables and couches made for lightning fast set changes.

Music was prerecorded, and very well produced, and the main cast members had fairly good radio mics. At times it was hard to hear the ten or so person chorus.

Four lighting towers topped with robotic lights provided a stunning light show during the overture. I wish this had been saved for a big finale, because the show sort of trails off at the end. It could have used that final boost and a bigger production number to finish off, but that’s going to depend on yet another try at finding a compelling story.

It’s really impressive how quickly they load in these shows, as Fringe has the same theater scheduled back to back to back.

The audience was large and appreciative. Given the care with which this production was put together, I’m sure this is one of this year’s top Fringe shows.