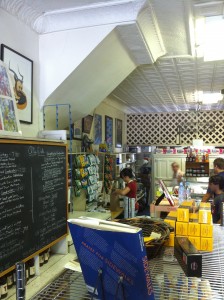 It really is true that you need to live in a place for a while to discover its secrets. I’ve been in Evanston for two months, yet it’s only in the past two days that I’ve happened upon two of my favorite places. Last night it was Bistro Bordeaux, and today it’s Al’s Deli, which is also, oddly enough, French.

Today was perfect weather for a walk: mid-seventies, clear, a light breeze. So I headed back up to the area west of NU to further explore the business district there. Along the way I stopped at Howard’s Books, a used bookstore at Maple and Foster, and of course I had to buy some books.

I continued up Maple to Noyes. The area is full of charming little rental houses, some of them not twenty feet wide. 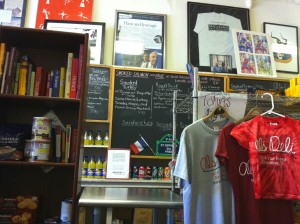 About a block to the east is Al’s Deli. It was founded in 1949 by Al Pottinger, a francophile, who offered European groceries, baked goods, soups and sandwiches. His sons took the business over in the 1970s, and are still there. They offer traditional french sandwiches such as brie on a baguette, plus homemade soups. The Soup au Pistou I had today was wonderful, a cup full of chunky vegetables with a dollop of garlic aeoli that turned it into something you might find in a bouillabaisse. They also make six types of enormous, tasty cookies themselves. The place is a short walk from NU, in the charming little area around Noyes and Sherman.