Last night we attended the Johnny Mercer Songwriters Showcase, where 16 incredibly talented young songwriters show off the songs they’ve written during the past week’s workshop. Last year it was the highlight of the summer shows we saw, and it didn’t disappoint this year. Every song was a winner.

Tonight we attended Applause! Applause! where the best of those songs were presented to a larger audience, along with professional performances from the songbook of Charles Strouse, who was honored with an award. Strouse wrote Bye, Bye Birdie, Applause, Annie, and quite a few other musicals, as well as the theme song from All In The Family. At the end of the evening he received his award and entertained at the piano and told some hilarious stories; he’s quite the card for an 83 year old.

Earlier today Dani and I walked through the closed streets of Evanston, where there was an art festival, and then walked up to Central to buy some spices at The Spice House and some cheese and bread at the gourmet market. All together it was a five mile walk, and her ankle held up well, its first real outing since taking her cast off and starting physical therapy.

During our walk we revisited some of the fallen trees from last week’s storm, which have now been cut up and cleared. It’s not hard to figure out why this large branch—that I photographed previously—broke off: 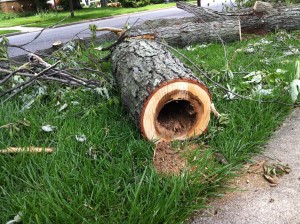