Linda and I volunteered to help out at the 2012 Central Florida Scottish Highland Games. This was my second year, Linda’s first. Last year I staffed the will call table and scanned pre-printed online tickets. This year we worked the ticket booth at the lower gate, both selling tickets and scanning those who had purchased online. 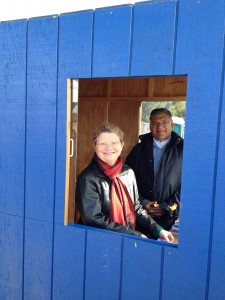 It was a brisk morning, only 45 degrees when we started, but the kilted participants didn’t seem to mind. After a while Emilio joined us, but there wasn’t really enough for two people to do, let alone three. Traffic arrived in waves, with most participants on site by 10 am; then things slowed down until we went off shift at noon.

Linda and I strolled around the grounds of the festival, which is mostly about clan tents, bag-pipe marching, and a live performance stage. There’s a tent that sells beer, and the clan tents usually have whiskey, so sobriety is not a feature, although at noon everyone still seemed sober.

The games mostly consist of throwing heavy objects. Some, such as hurling, seem particularly dangerous, since there’s nothing preventing an errant hurl into the crowd. We gave it a wide berth, and went to find some lunch. There were a broad selection of traditional Scottish foods, such as haggis, gyros and tacos. We settled on chicken-on-a-stick, which was good last year, but a bit undercooked this year, perhaps due to the cold.

Then we headed home to warm up!