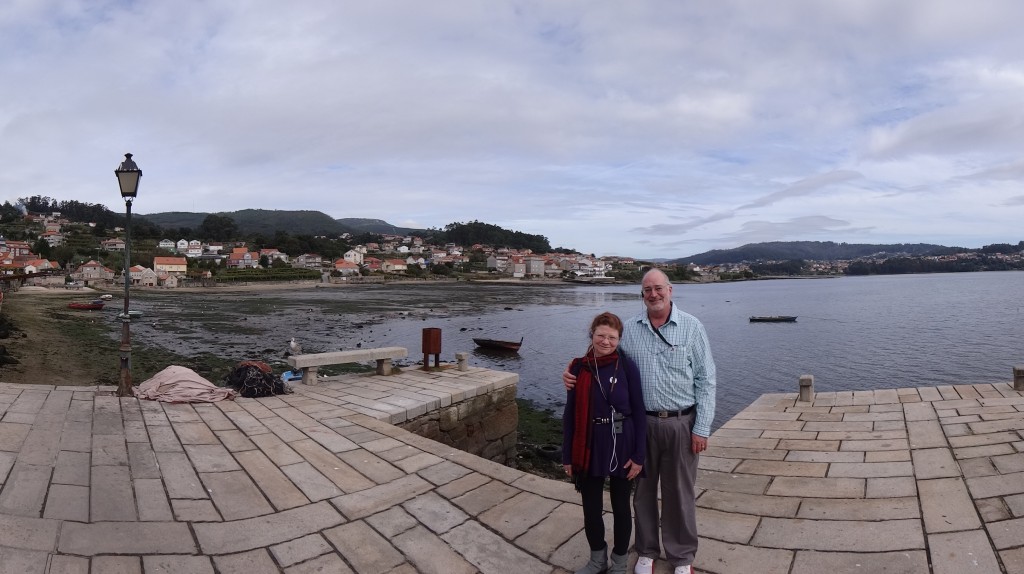 Vigo is one of the southern most cities in Northern Spain, located only 20 miles from Portugal. It is Europe’s main hub for shipping fish, and the 10 mile long harbor is filled with platforms used to raise mussels, oysters and scallops. It’s a pretty port, and you can step right off the ship into the bustling down tom, which is surrounded by hills dotted with spanish style homes.

The ship didn’t dock until noon, which gave us time for a workout and some breakfast/lunch before our shore excursion.

This excellent excursion took us up the coast to the next estuary, Pontevedra, where we visited the old city of Combarro. A few twisty stone streets have been toured into tourist shops. Each intersection features a fountain and a “cruceiros,” a religious monument intended to ward off evil spirits. Ironic, since the shops were selling halloween merchandise. We had some tapas and white wine at a seaside cafe before continuing up the coast to Cambados.

In Cambados we visited a small winery and guest house where we enjoyed a tour of the 5 acre property, which has vines, birds and some fruit trees. Then we had a delightful meal of tapas and wine in the courtyard. The mussels were the best I’ve ever tasted, and they just kept bringing out plate after plate of them. Also delicious were mild cooked and salted peppers, similar to the flavor of chile relleno, a great match for the generously poured—and repoured–Albarino. Their red was pretty much undrinkable—-a fact the owner essentially admitted—-but they also made some interesting flavored grappas. I bought a bottle of Albarino and a bottle of herbal grappa. Total cost: 11 Euros.

The group seemed pretty trashed on the way back to the ship. Amateurs.

For dinner the group of five of us met in the dining room for a taste off between Martin’s 2006 Dominus and our 2008 Chapoutier Hermitage Le Meal.