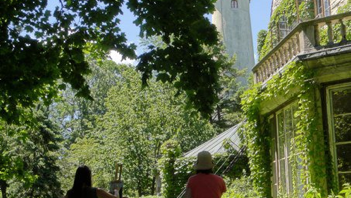 This summer while Dani is at work I wanted something to do, so I went up to the Evanston Art Center  It’s in the three-story house on the lake, next to the lighthouse north of the Northwestern University campus. I intended to enroll in the Monday morning figure drawing workshop, but it’s in the evenings during the summer, so they suggested I take figure sculpture. I’d done that once before, about ten years ago, and enjoyed it, so I signed up.

The classes are in the basement of the Noyes Community Center, west of the Northwestern Campus. (This is the same building that houses the Piven Acting Workshop that Dani used to attend.) The model holds the same pose for three weekly sessions of three hours each. However, because of my schedule I won’t ever have more than two sessions to complete a sculpture, so I have to work fast.

I really like the instructor, Sheila, who is very good at working individually with each student, and making sure you understand how to implement her suggestions. She’s much better than my previous Orlando-based instructor. The next few sessions are by another instructor, Barbara, so it will be interesting to see how she compares.

I liked the class so much I also signed up for the Wednesday session, which is similar, but there is a different pose. So by the end of the summer I should have six sculptures total. Hopefully there will be time for them to dry so they can be fired in the kiln.

Both of these photos are works in progress, before the proportions were quite right. I thought it would be interesting to compare them with the finished products… or at least to have a photo in case they explode in the kiln!