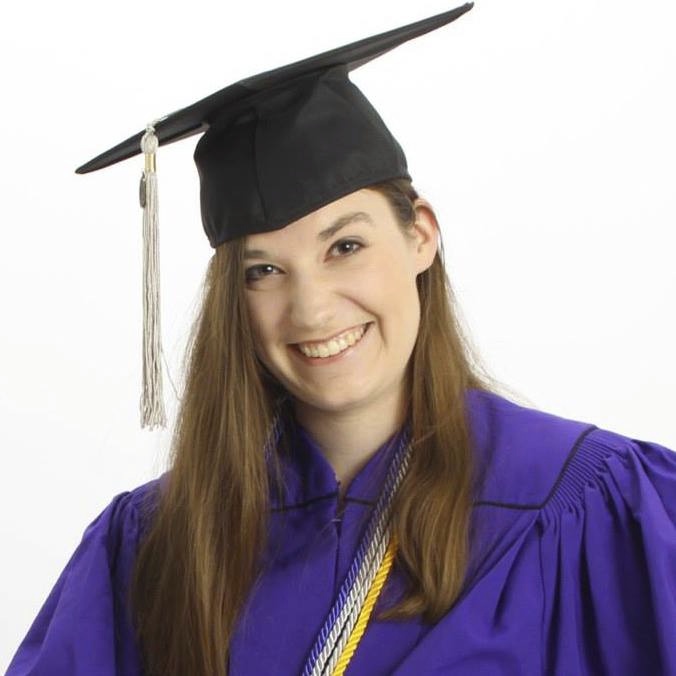 Dani graduated from Northwestern University on June 21st, 2013, with a BS degree and double majors in Communications and Psychology. Linda, Nicole and I travelled to Evanston for the festivities. It was an activity-packed few days. 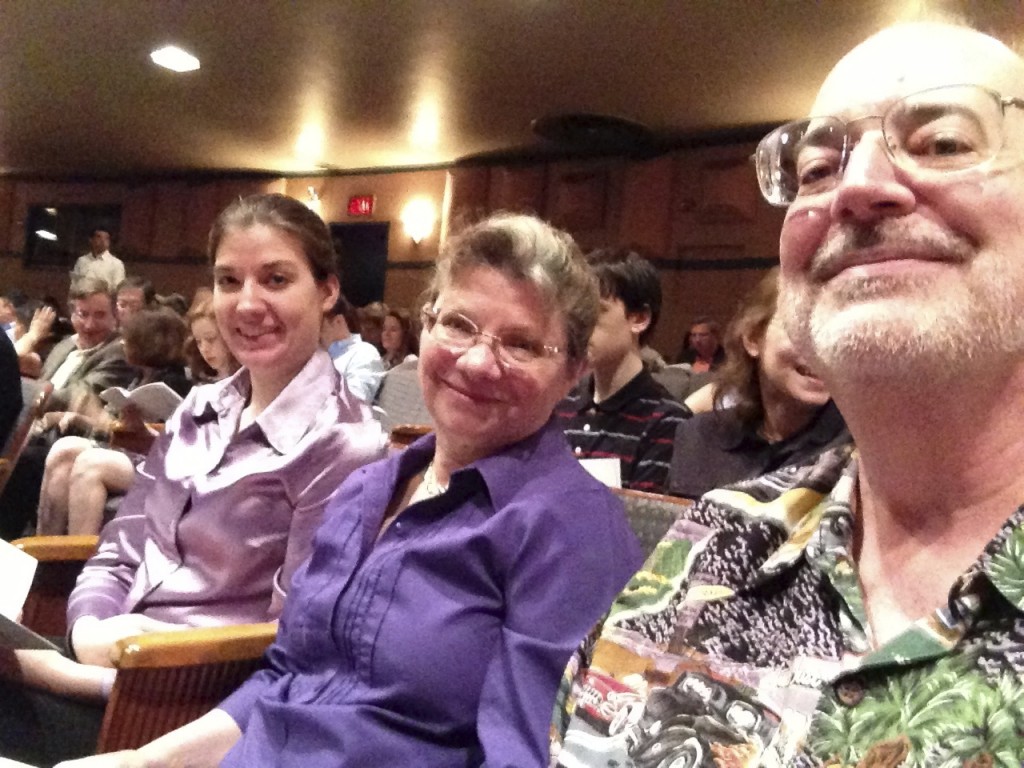 We began at the honors ceremony for the university, where Dani was recognized for her membership in the Mortarboard Society. 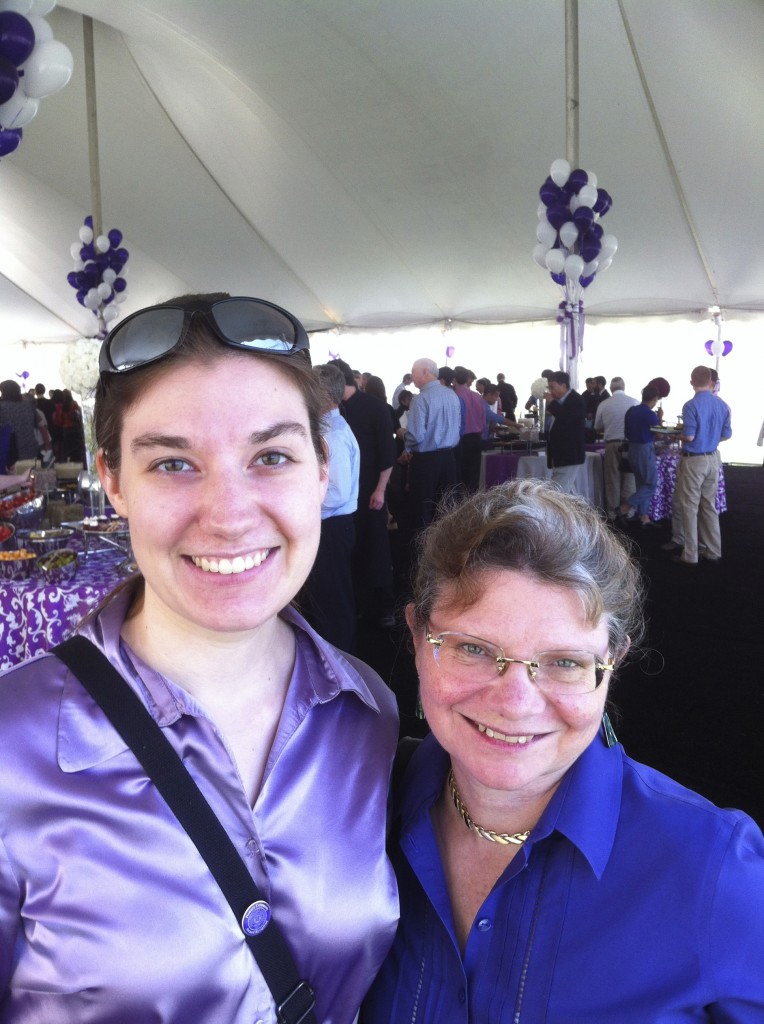 That was followed by a reception which Dani and Linda attended while I went to the airport to pick up her godmother, Nicole. 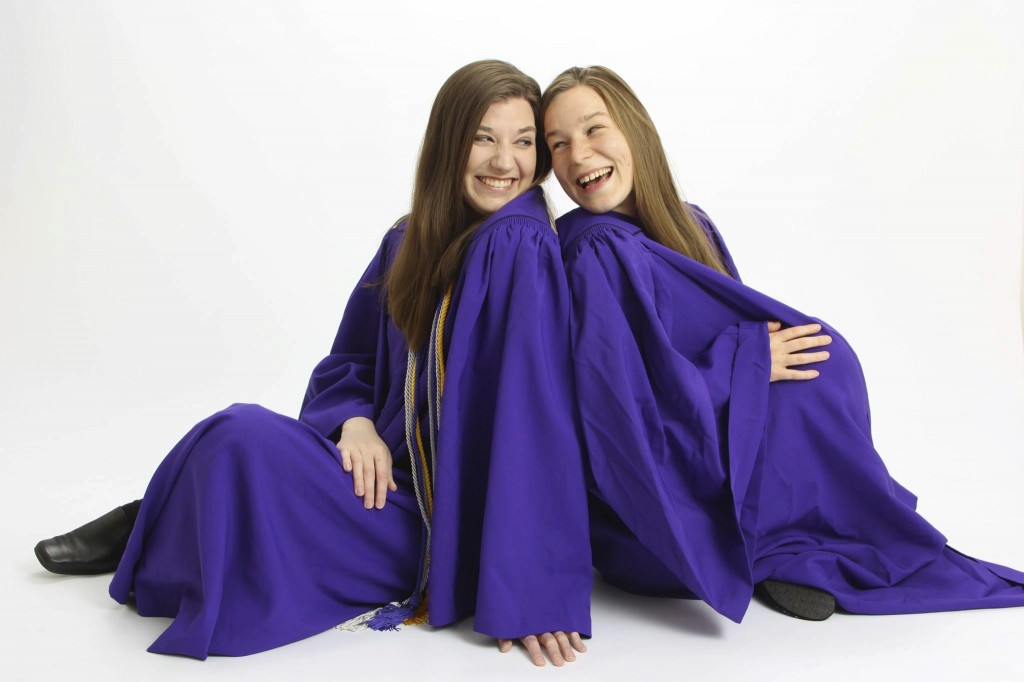 That afternoon Dani visited the local photo studio for some commemorative photos with her friend, Dana. 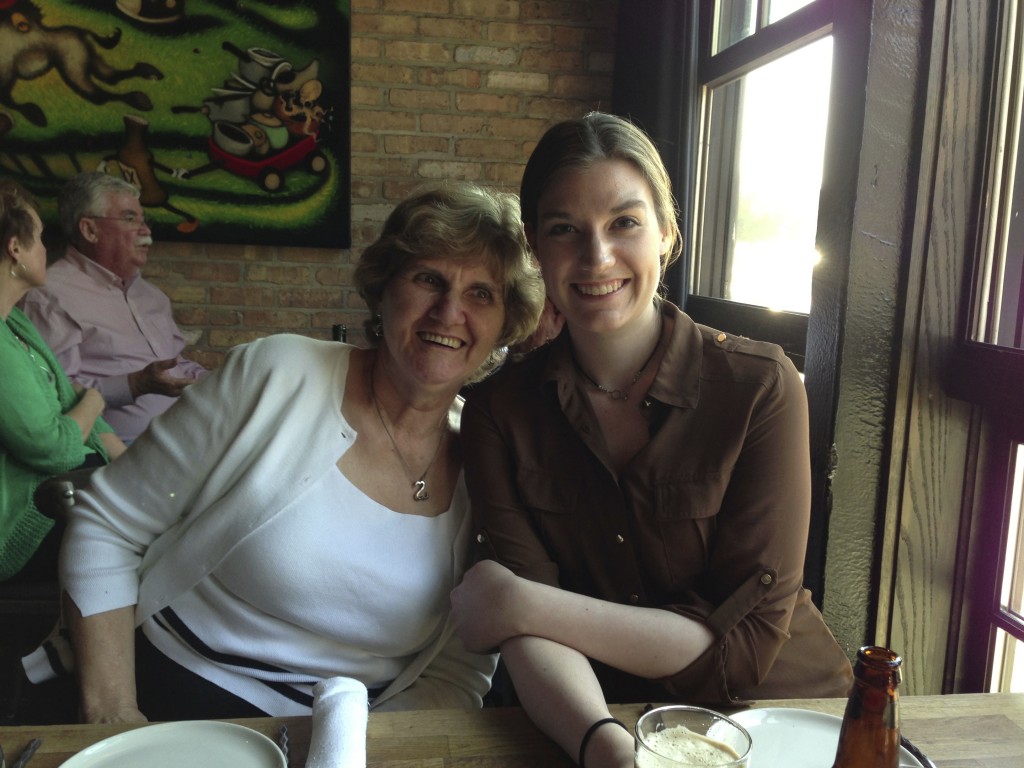 In the evening we went to one of our favorite Chicago restaurants, The Girl and the Goat. 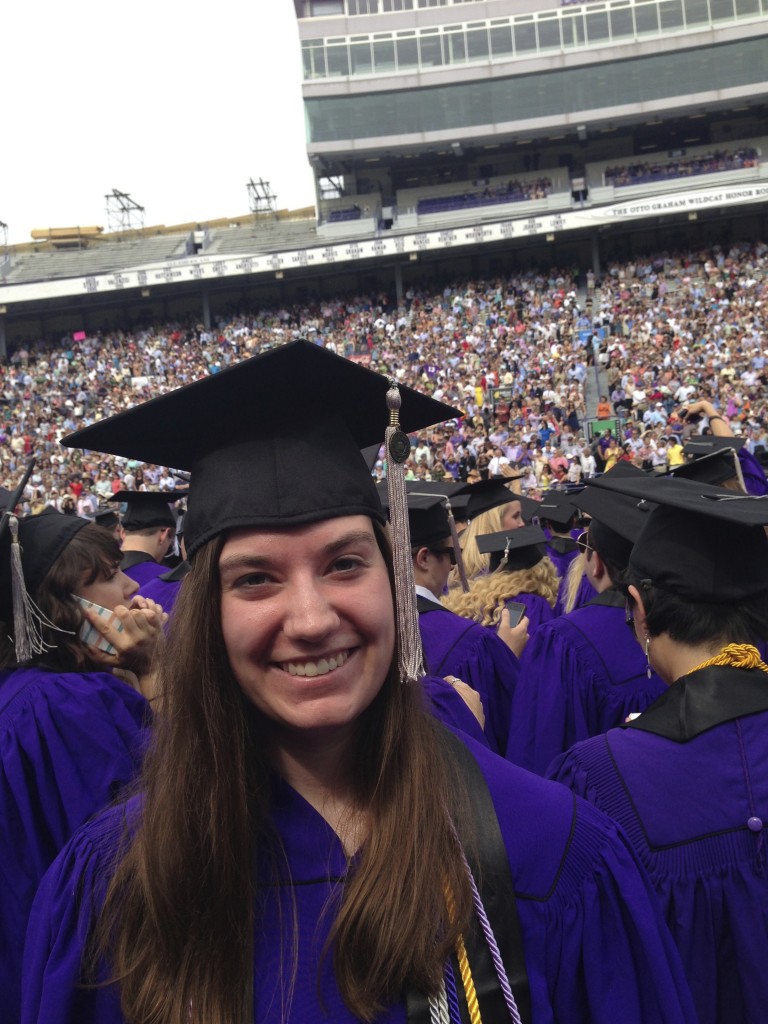 Friday was the entire university’s commencement ceremony on Ryan field. The speaker was Mikhail Baryshnikov, who delivered a charming, heartfelt speech. 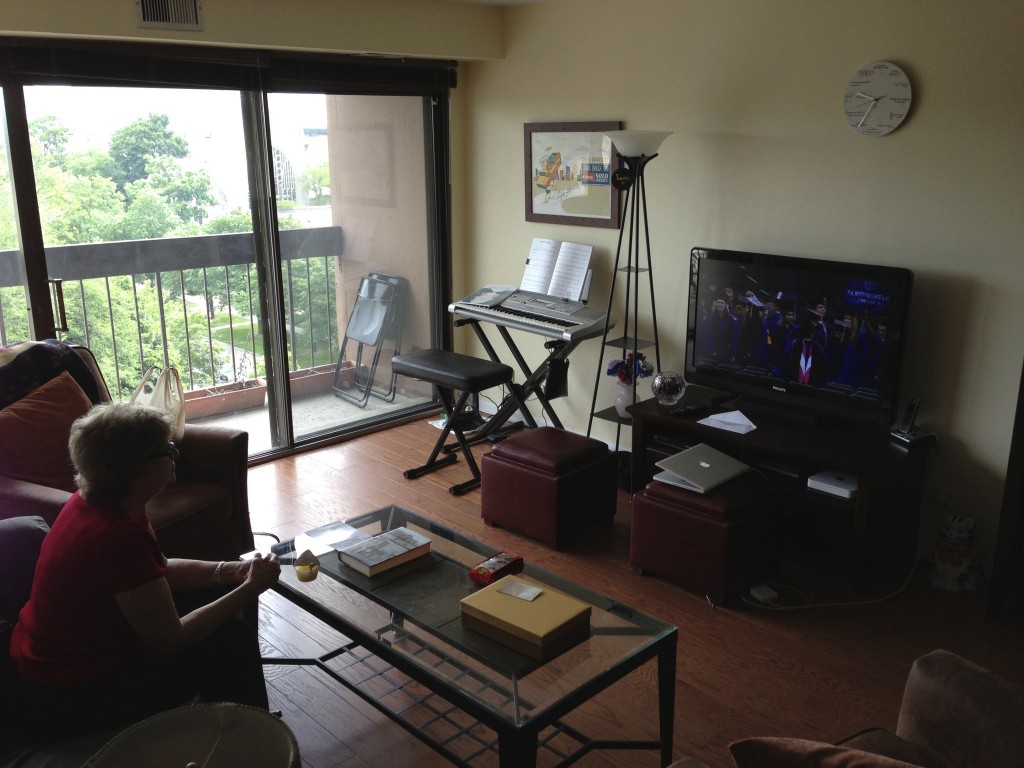 We had a great view, because we watched it on high definition streaming video in the comfort of Dani’s apartment  The camera coverage was exceptional (done by the film students) and the audio–especially on the amazing orchestra–was terrific, too. It sounded like a CD. Dani’s friend Dana played the french horn in that orchestra. 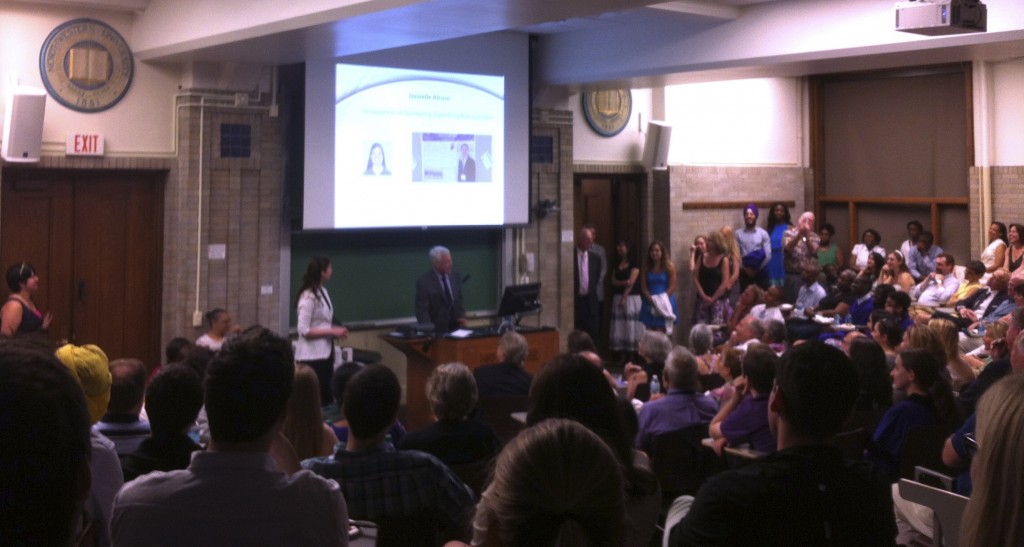 In the afternoon we got absolutely soaked on our way the the Psychology Department’s party. But it was worth the trip, as Dani was recognized for her research grant. I had no idea how competitive that study she did last summer was, but she was one of only 2 proposals funded out of 250 applications. I also had no idea how special her presentations at two psychology conferences were. I had assumed it was a student adjunct to the conference, but her study was accepted as a part of the adult conference. Amazing. 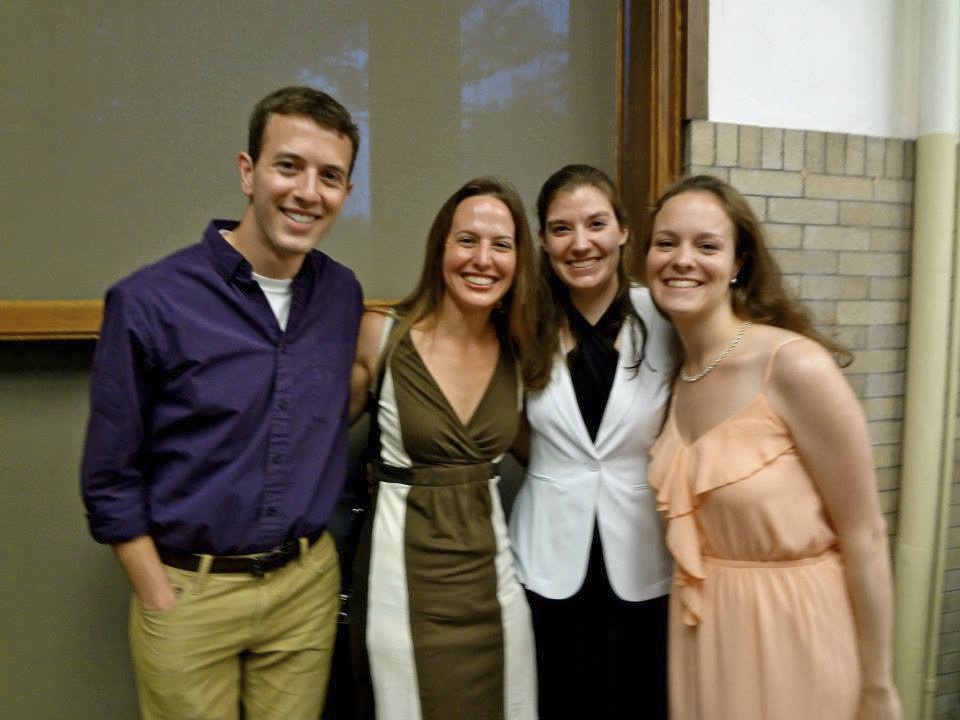 At the party she posed with the other departmental star student, Mike, and her beloved professor (apparently the whole university’s favorite professor) Renee.

In the evening we went to our favorite Evanston restaurant, The Stained Glass. 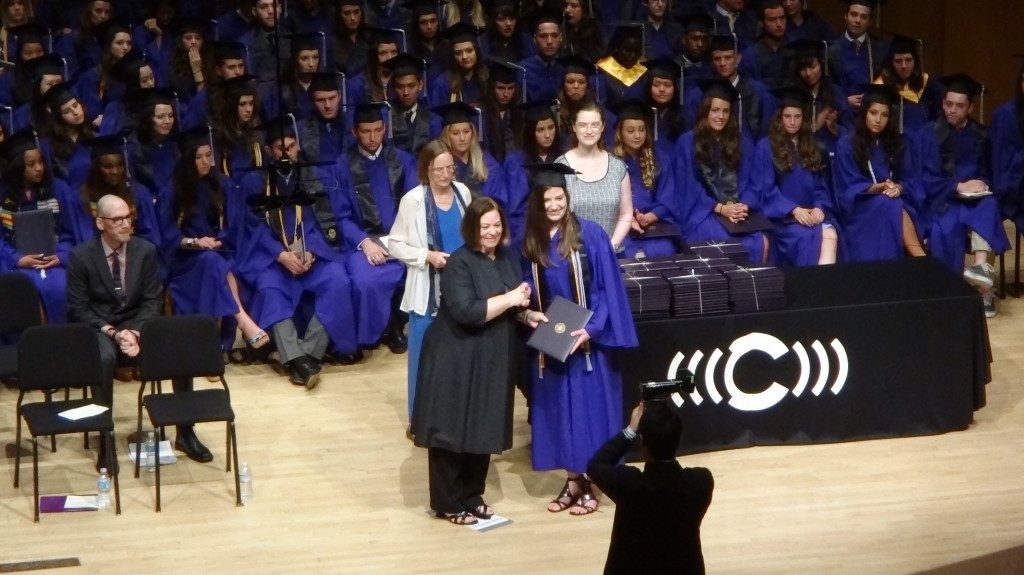 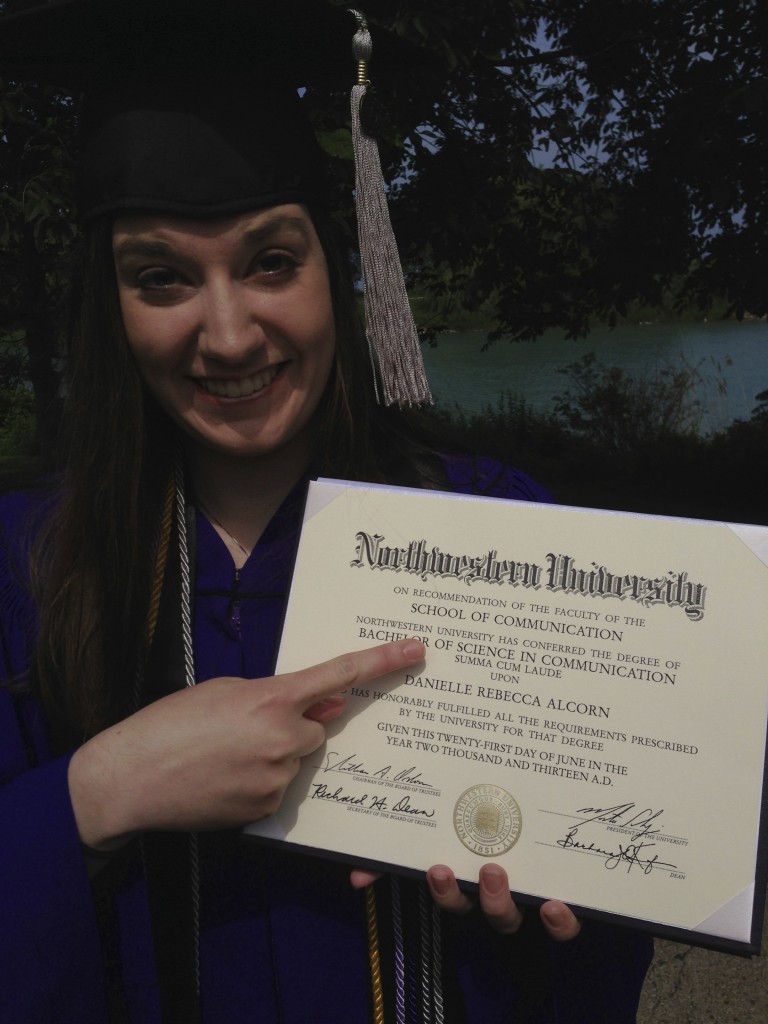 That diploma holder was actually empty, but she ran over and got the real one before they changed their minds. 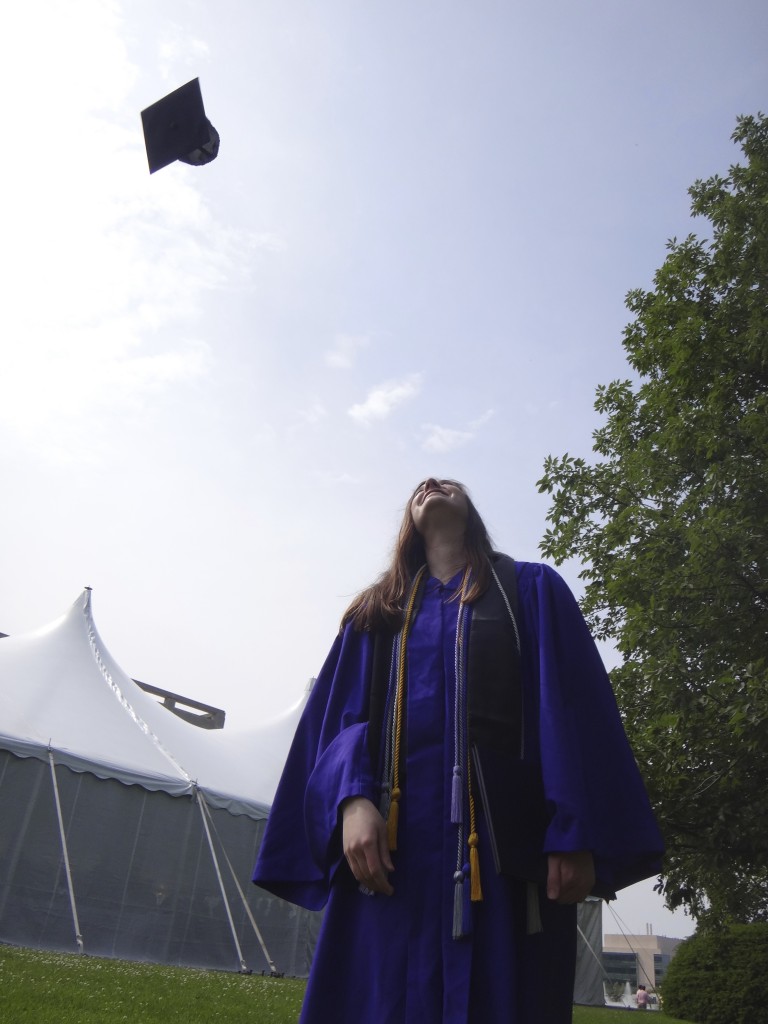 Afterwards we retired to the lake fill for some Champagne (price: about $100,000 a glass) and celebrating. 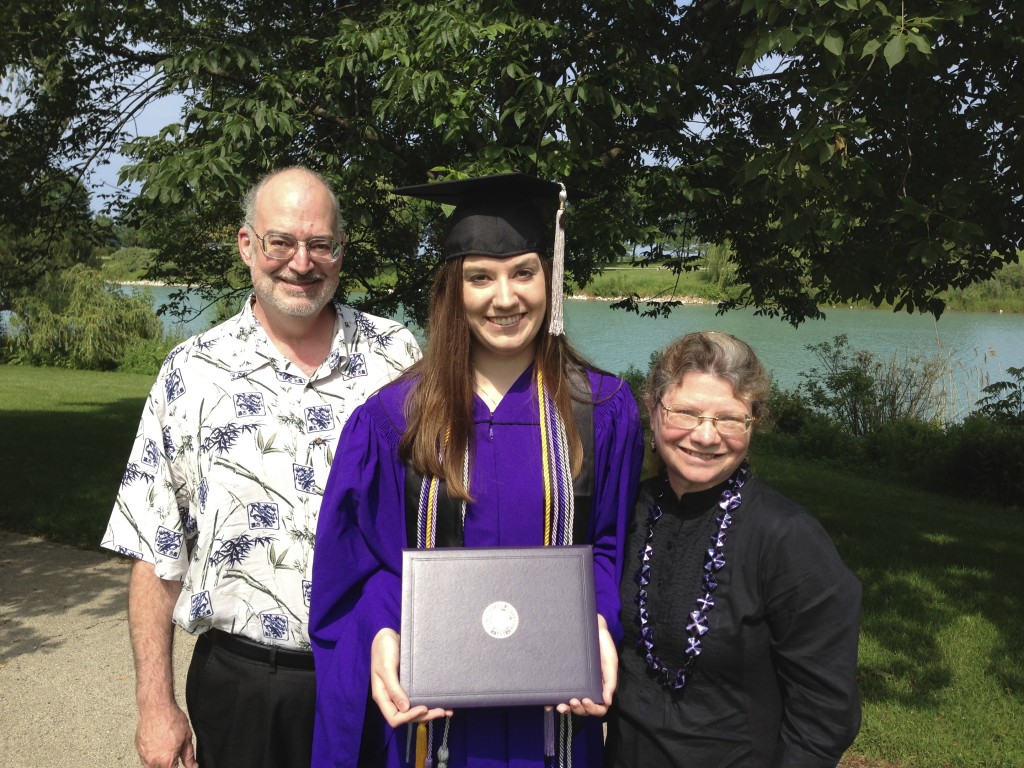 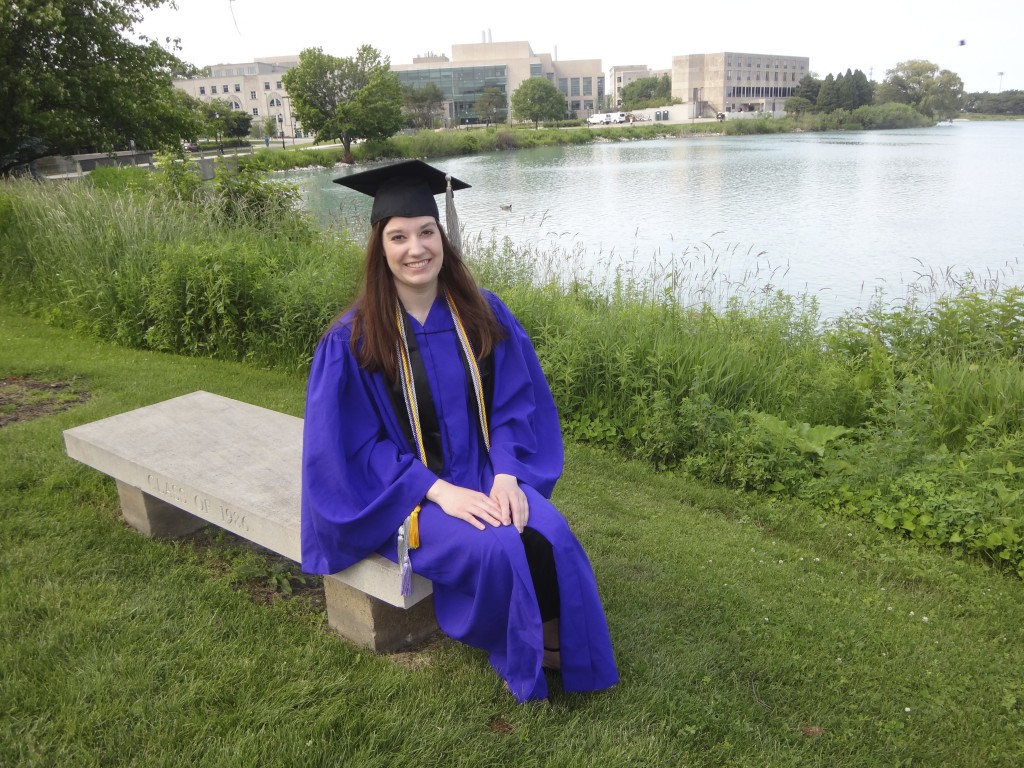 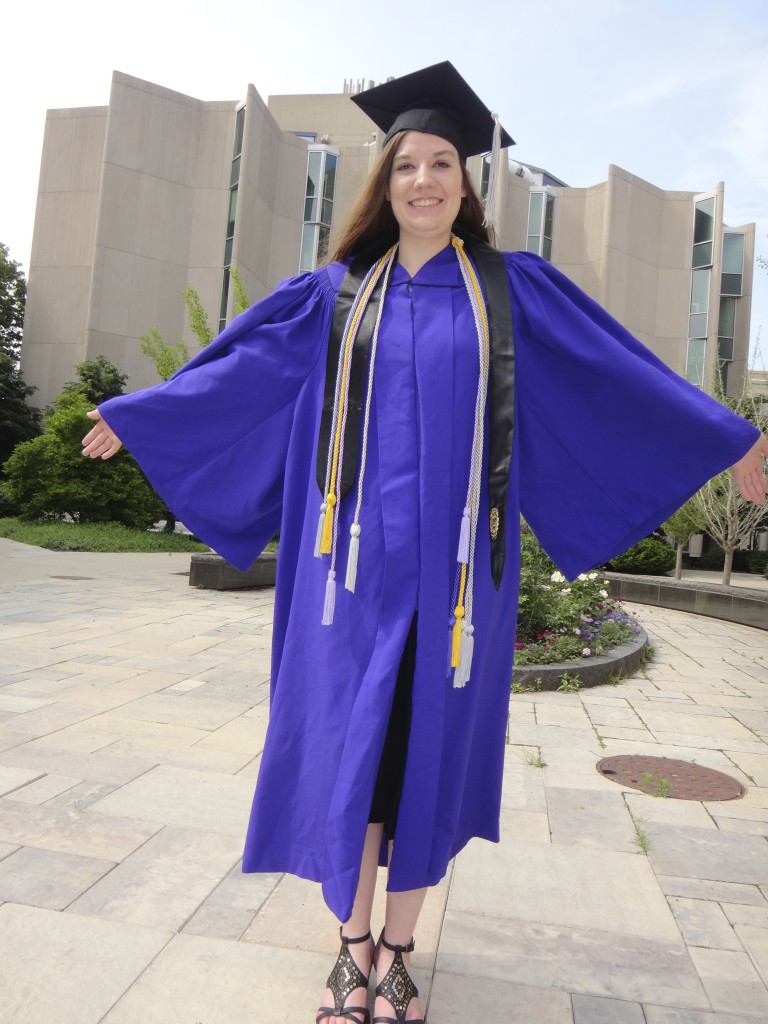 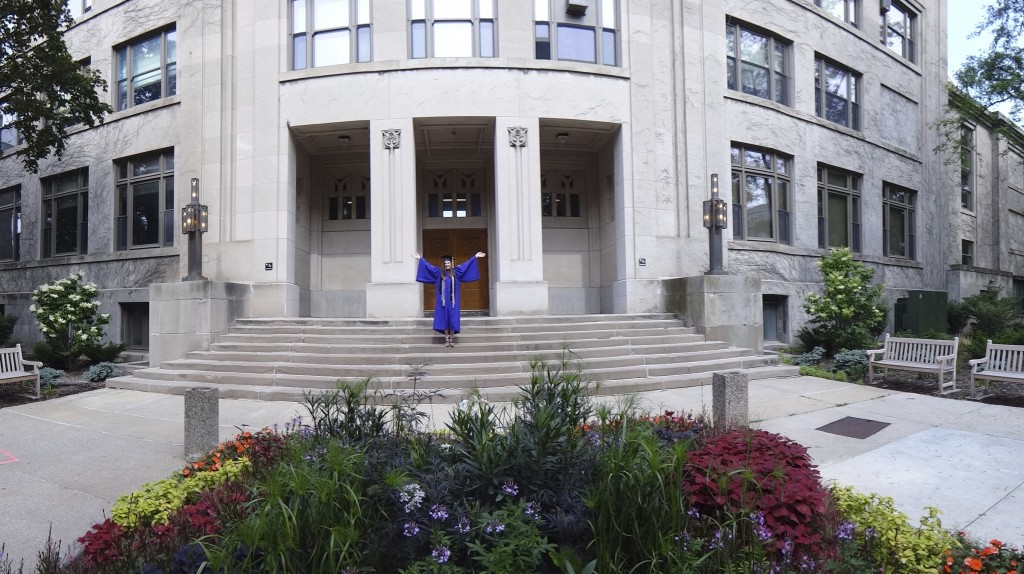 …and in front of the psychology building. 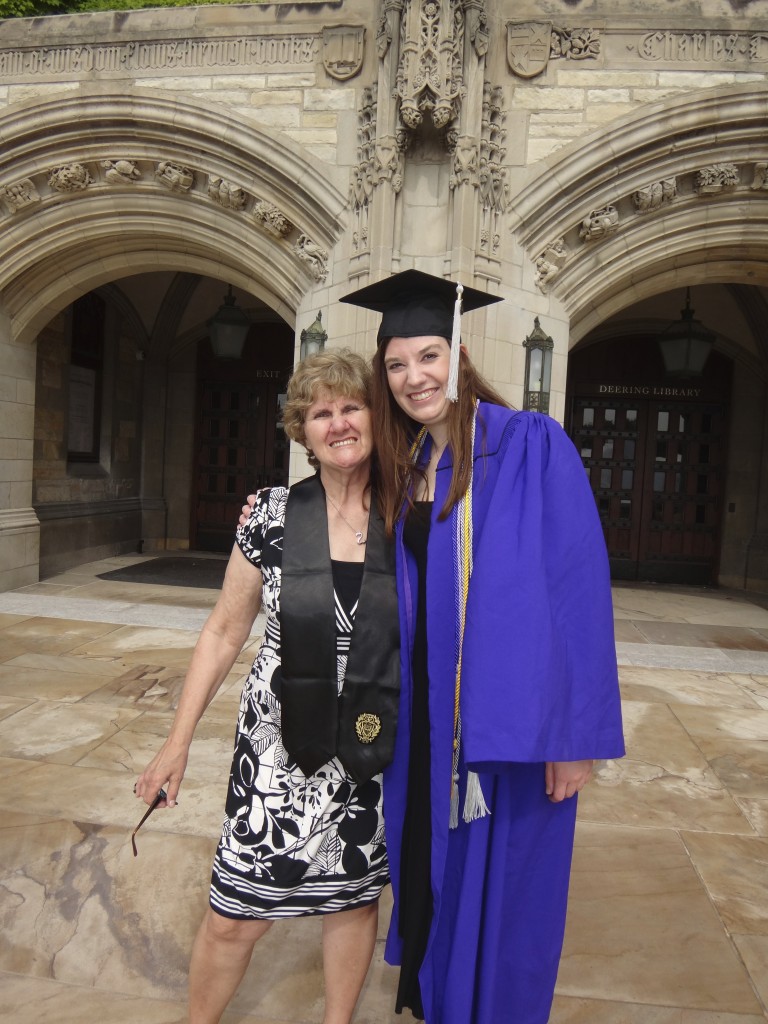 As part of the graduating tradition, she gave her stole to Nicole in thanks for all her support. 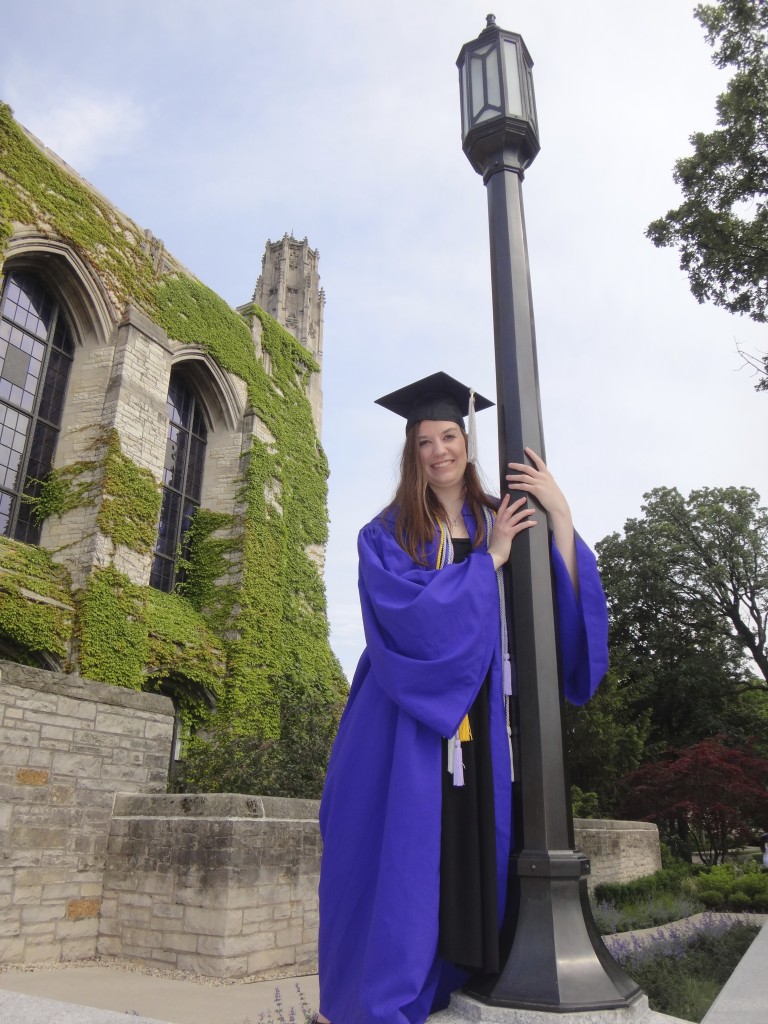 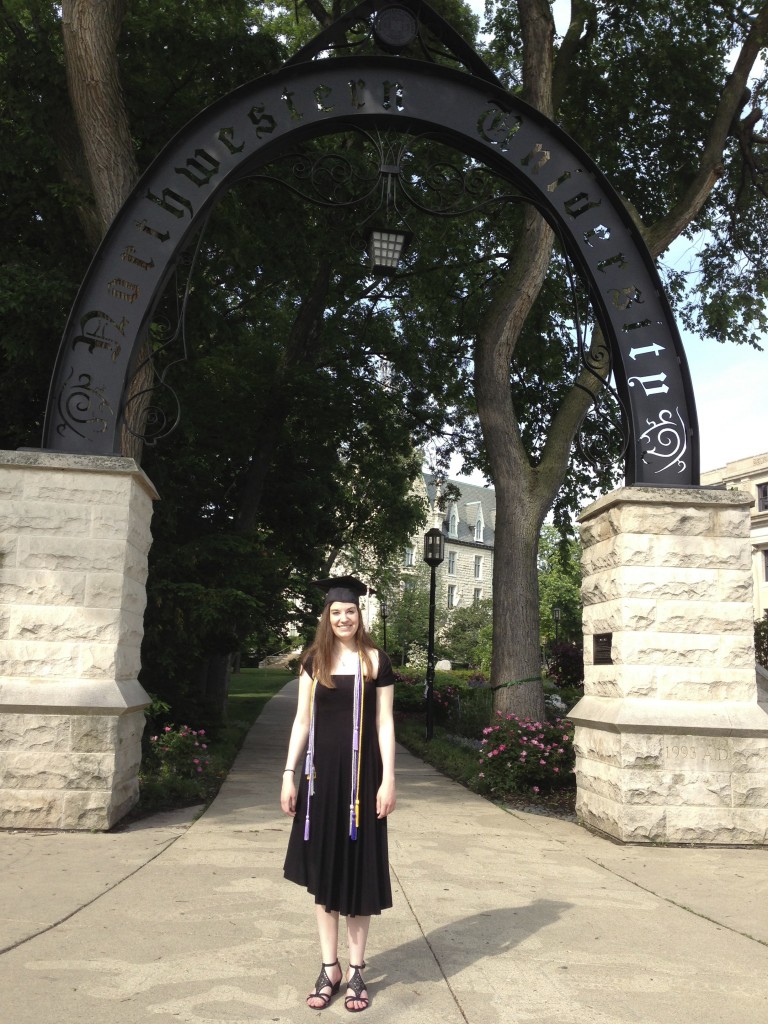 This picture makes a nice coda, since it’s where Dani stood six years earlier during her college tour of Northwestern. 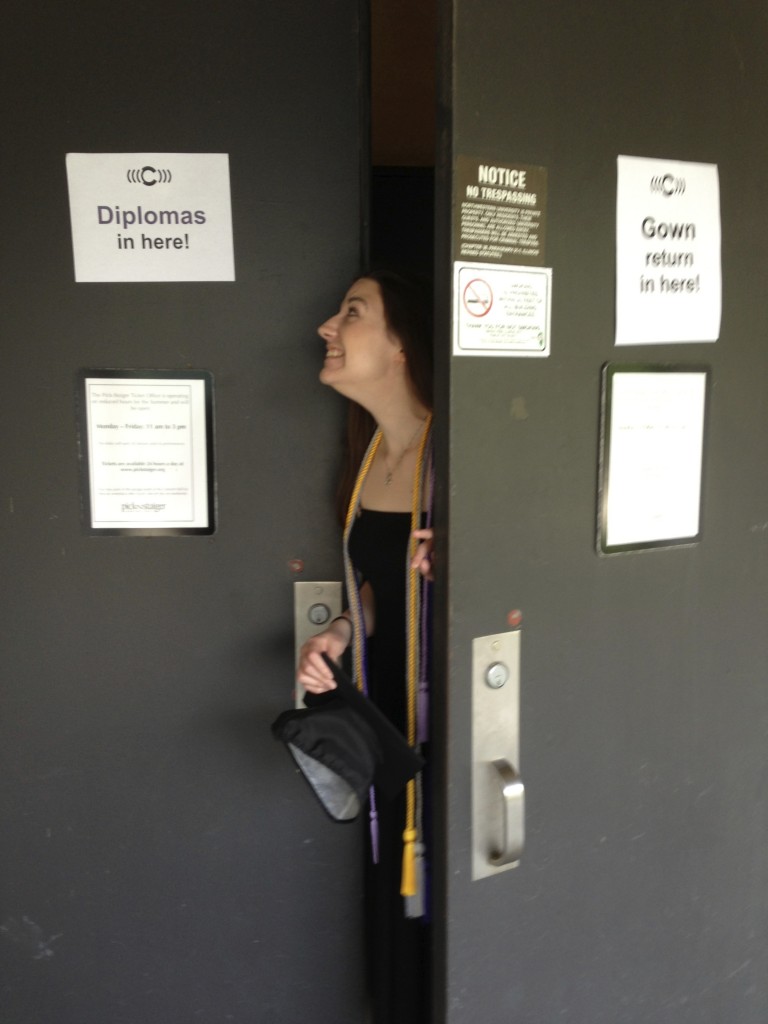 Finally, it was time to return her robe and say goodbye. 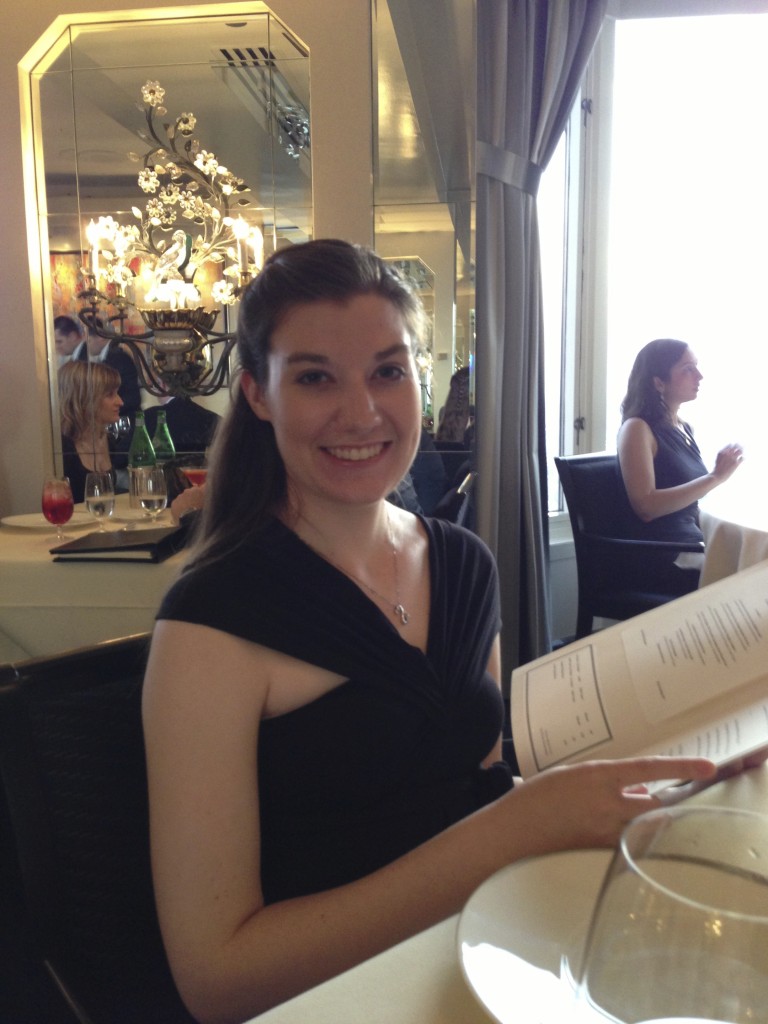 We celebrated her many accomplishments with a lofty dinner high atop Everest.