We convened in the private room at The Chef’s Table at the Edgewater for a tasting. I have been trying for a couple of years to get Kevin Buckler of Adobe Road to schedule an extra day when he is in town so that I could introduce him to the magic of old wines. Kevin has an extensive cellar focusing on modern California wines, while Ron and I have cellars full of old French wines. So this was the day.

In attendance were Ron and Bev Siegel, Kevin and his friend Henry Wolfond, John and Debbie Henline, Martin Chaney, Linda and I.

We’d never done an event like this at The Chef’s Table, because they lacked the glasses. I solved that problem by giving them 62 Riedel Ouverture series, which worked well for both Burgundy and Bordeaux. Now we’ll have glasses there for future events.

The Chef’s Table staff, and especially our server Teran did a fabulous job. She is quite interested in wine and had researched the background on the wines, which was really neat.

Rather than our normal tasting followed by dinner, I had pre-matched the wines to food. Every course was great, and perfectly paced for our almost 5-hour dinner.

It was fun to introduce a couple of virgins to the complexity of old wines, and I think it’s safe to say they were stunned by the freshness and appeal, especially of the old Burgundies. As usual, serving the Burgundies first took the bloom off the Bordeauxs, but overall every bottle was in great shape and had something to offer.

The menu, followed by my wine notes: 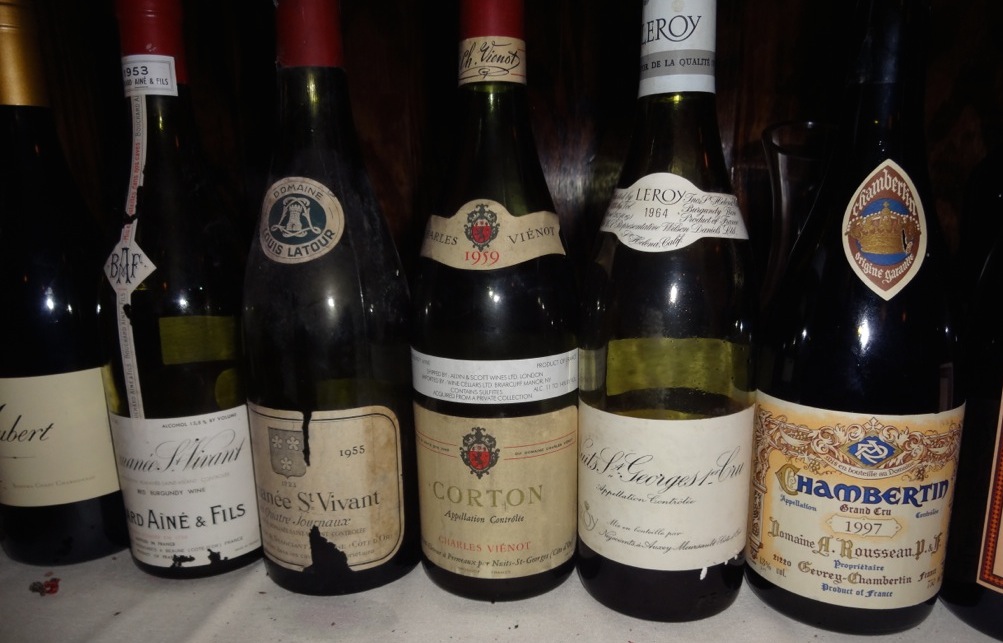 Complex oxidative nose with secondary fruit flavors that develop after several minutes. This wine evolved for two hours in the glass. This Champagne is made with a Solera process, where older years are added in to new vintages. 95 pts

Candle wax, lime, cotton candy, anise, butter. This was a bit of a disappointment as it never opened up as much as usual. 92 pts

No contest, this wine blew away the “Y”. Wood, spice, caramel, butter, good acid. A great match to the salmon. 94 pts

Smoke, bacon fat, charred log, fresh cherries, fabulous. My (and most people’s, I think) Wine of the Night. 96 pts

Delicate, refined, great potential, it was easy to see how this could turn into one of those great old Burgundies some day. 92+ pts

A great Burgundian wine, the first released vintage from Adobe Road. Wow, I wish they still made their pinot in this style! The wine fit right into the Burgundy flight. 92 pts

Much headier than the ’66, young, red fruit, balanced. I hadn’t had this vintage of this wine before, nice one. 92 pts

Huge, structured, balanced, round, charred meat. This wine didn’t fit in this flight, but it will be great some day. 94 pts

This was supposed to be a 1968, but turned out to be a 1969. Fortunately the vintages are extremely similar, although this was not an exciting bottle. Waxy, youthful but with a slightly bitter finish. 89 pts

I think I’ve only had this vintage once before. Waxy, young, tight, green. This just wasn’t a Georges de la Tour night! 88 pts

I think there was a lot of disagreement about this wine, but it has always blown me away, and continues to do so. Dark, unctuous, very fresh and young. Linda called it cough syrup, I thought melted chocolate. I wish I still had some of this! 95 pts

Wood, smooth, youthful, balanced. Holding up much better than other old Silverado I’ve had. Of course, this was a great year. 93 pts

Smoke, almost no petite syrah character. This is the wine we’d slip into a cab tasting to fool everyone, and it would win. I wish they still made it in this almost Bordeaux-like style. 93 pts

Smoke, huge. I decanted this 3 hours before we poured, and it was almost ready to drink. This vintage is much more accessible than most Grange. 96 pts.

Blueberries, dense, still needs years. Like the Grange, this has 3 hours in a decanter, but still wasn’t ready. 97+ pts

What a treat to try this unreleased wine made from Silver Oak fruit and done in half French half American oak! dusty, balanced, smooth. 93 pts

This unlabelled bottle was probably 2002 Cabernet Sauvignon. Another stellar effort. surprising sense of residual sugar, perhaps just a sign of how much fruit is still in it. 93 pts

Winner of the Sonoma Harvest Fair. This is a terrific wine. 94 pts

Too bad this came at the end of a long evening; it’s spectacular, and would have matched every dish we had. Sometime I’m going to take this to the Chef’s Table and nurse it all night. Burnt sugar, caramel, citrus on the palate, great acidity. 98 pts