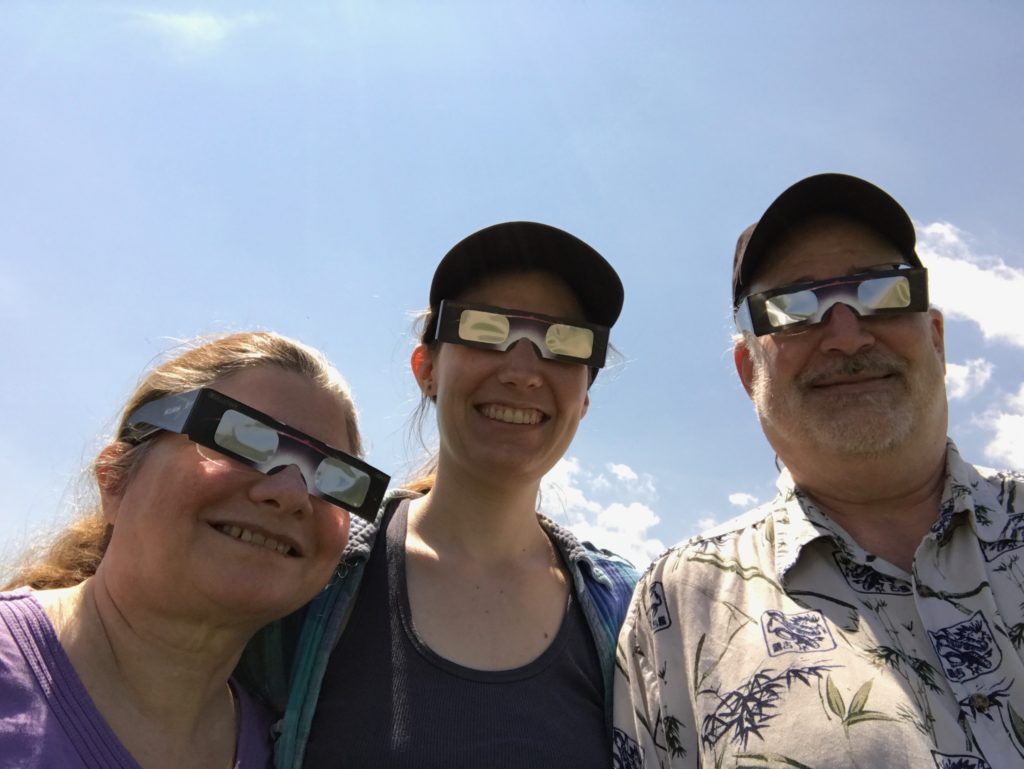 Everyone has seen photos of partial solar and lunar eclipses, and they look surprisingly similar. In person, the experience is somewhat different, because one happens during the day, and the other at night, but it’s not that much unlike the photos.

However, there is one experience that is completely different, and isn’t at all like the photos. A total solar eclipse is the event of a lifetime, really impossible to capture in photos or video, and just as impossible to describe, although I’ll try.

On August 21, 2017, for the first time in a hundred years, a total solar eclipse traveled across the United States. For a few days it was the talk of the media, but many months before we’d made a plan to put us in position. Since we’d been staying in Chicago it made sense to stop in Nashville on our way home to Orlando. Nashville was one of the largest and certainly the most interesting city in the path, so there were 90,000 other people with the same idea, but we flew in a day early to avoid any travel issues, and encountered no traffic.

On the day of the eclipse many people went to the stadium, which baffled me, because you want to be somewhere out in nature, and where you can see the horizon. You also want to be mobile in case of clouds.

So we had arranged to rent a car, and at 10 am Linda, Dani and I began our drive about 90 minutes east, to place us near the centerline. This would increase the time of totality from just under two minutes to two minutes 39 seconds.

We had no preset plan, and looked for good viewing places along the way, and also monitored the weather, as clouds were likely to boil up in the afternoon. In the end we ended up in Carthage, Tennessee, which was almost on the centerline.

As we had lunch in a small Mexican restaurant, I searched online for someplace to buy a lighting cable, since Dani’s phone was out of charge. It turned out there was a nearby Walmart where we could get one. As we sat in the parking lot charging the phone we realized it was nearly a perfect spot to wait for the eclipse, assuming the circling clouds stayed at bay. 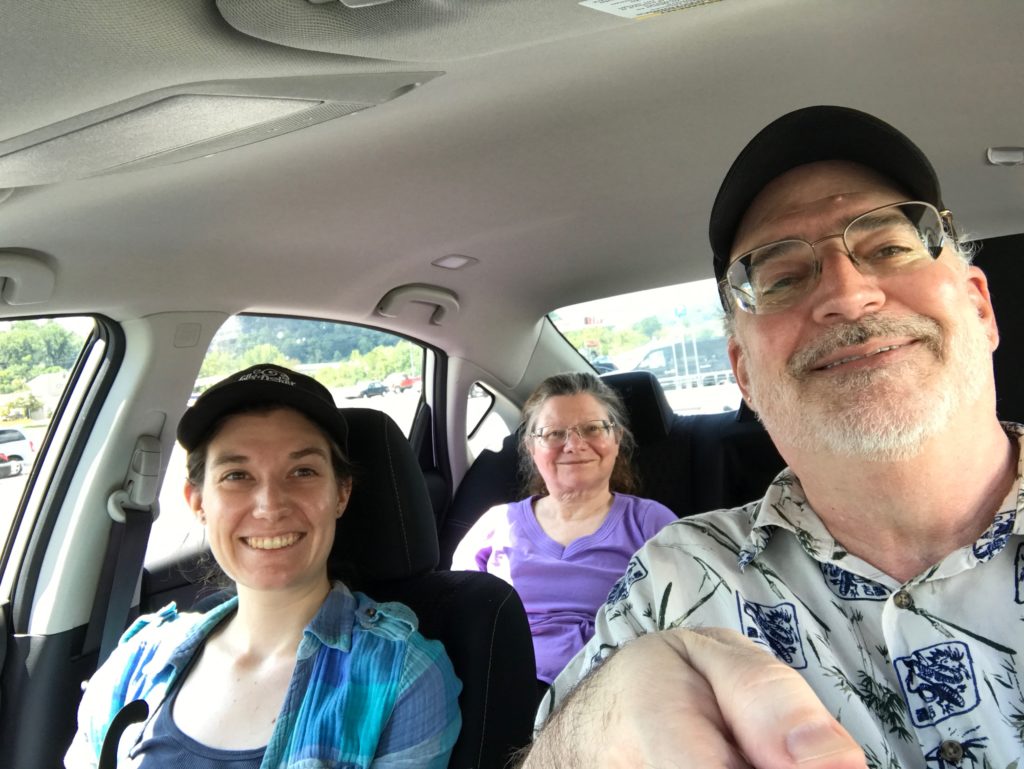 The eclipse had begun while we ate lunch, but we knew it would be almost 90 minutes before it got really interesting. As we waited, we could see through the special glasses that the sun was turning into a crescent, but surprisingly it wasn’t particularly apparent that it was getting darker. This continued to be the case almost until totality.

A comment on the radio about light pollution made me realize that the Walmart parking lot lights might turn on during totality, so we moved to a nearby field.

As the minutes counted down we got out of the air conditioned car and began to observe. In the last couple of minutes it started to get quite dark, and the temperature began to drop a bit from a muggy 95 degrees.

Then, as the last sliver of crescent sun disappeared, everything suddenly changed. 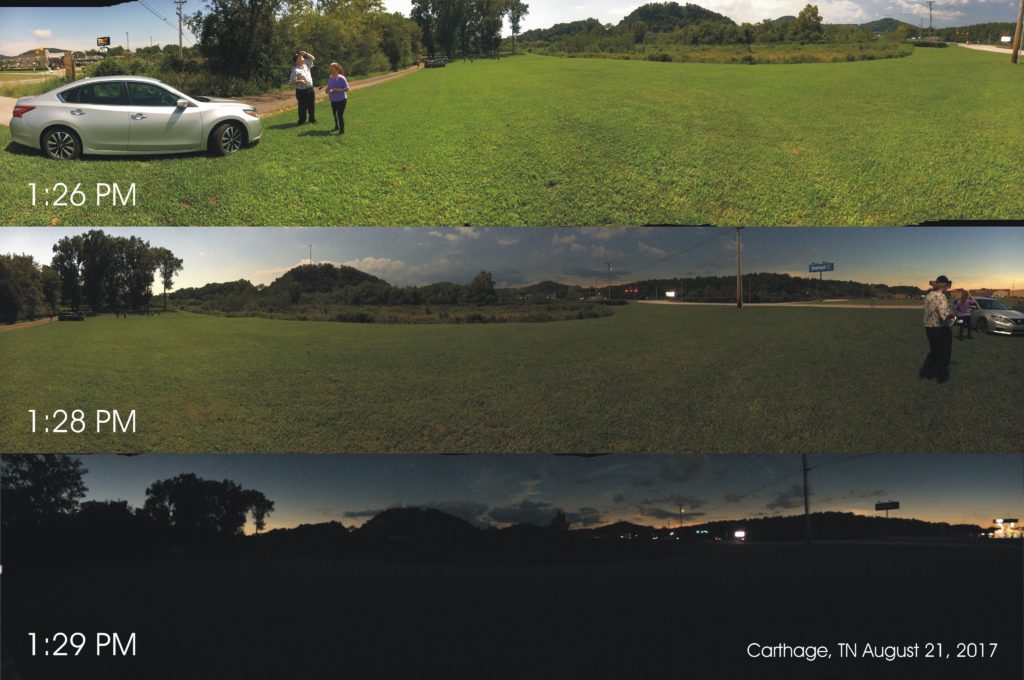 This is the part that is hard to explain. Suddenly, you can’t see anything through the glasses. You take them off, and above you is a pitch black rocky ball surrounded by irregular rays of cold, white light.

The temperature plunges ten degrees in a moment.

All around you it is sunset on every horizon — a 360 degree late evening.

Venus is suddenly there, brighter than you remember, and also a few other stars.

Most of all, you are intensely aware that you are in space. You are standing on a giant rock, and above you another giant rock hangs, and behind that a great fiery ball is obscured, but its gasses stream out in all directions. There is

There is no up or down. You are in space.

And then, suddenly, a red dot erupts from the trailing edge and you slap on your glasses. As fast as it came, it is over.

The light has a cold bluish cast, and quickly swells back to daylight, taking only a couple of minutes to seem almost back to normal.

It will be 90 more minutes before the eclipse ends, but you will remember that two and a half minutes the rest of your life.